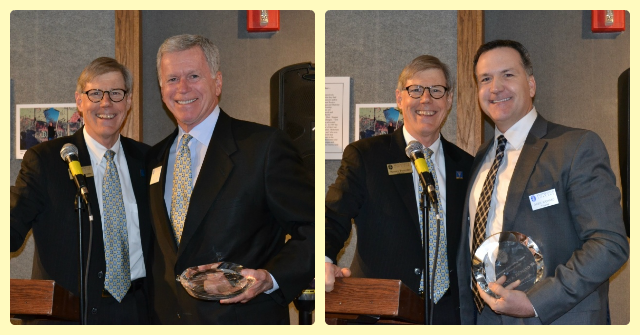 Three times a year, members of the Westminster College Board of Trustees convene on campus to govern the College and National Churchill Museum onward and upward.  Through their outstanding leadership and their dedicated efforts of time and talent, the Board of Trustees members make an significant impact at Westminster each year.

At the February Board of Trustees meeting, President Barney Forsythe proudly recognized two Board members to celebrate another form of outstanding support to Westminster College – their generous financial gifts.

G. Robert “Bob” Muehlhauser (pictured left), Class of 1968 and former Chairman of the Board, and Gregory A. “Greg” Richard (pictured right), Class of 1988 and Chair of the Student Life Committee, were honored as new members of the Robertson Founder’s Circle, one of Westminster’s most prestigious lifetime giving societies.  The Robertson Founder’s Circle celebrates donors who have cumulatively donated between $250,000 and $500,000 to Westminster College in their lifetime.

Bob’s charitable support to Westminster began in 1973 when he made his first gift to the Westminster Fund.  In the four decades since that first gift, Bob has supported a wide range of initiatives across campus including the capital campaign to renovate the National Churchill Museum and the start-up funding for Westminster’s second campus in Mesa, Arizona.  However, despite the many restricted purposes he has supported over the years, Bob’s annual priority has been supporting the Westminster Fund which fuels the core of the Westminster mission – scholarships, student programs, and faculty and staff.

Greg’s generosity to Westminster began the very same year in which he graduated, and his outstanding support to the College has continued ever since.  Greg’s passion for Student Life and enhancing the student experience is evident in the areas of the College he supports financially.  One of Greg’s main interests on campus is the Center for Career Development, specifically student internships.  Greg is currently working to endow the Greg Richard Internship Endowed Scholarship, and has also made gifts to elevate the work space and reference materials of the Career Development Center.  Over the years, Greg has also generously supported the Track and Cross Country athletic programs, the Coach Dick Ault Endowed Scholarship, and the Westminster Fund.