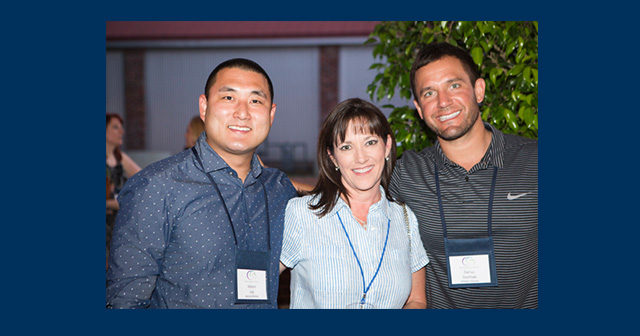 Above, from left to right, Steven Lee ’08, a representative from Aetna, and Darius Dashtaki ’09. Lee and Dashtaki have both been recognized as members of the President’s Circle at Aetna — representing the top 10 percent of the company’s account executives. 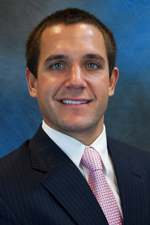 Darius Dashtaki ’09 learned many things in his four years at Westminster, but he says some of his most important lessons weren’t found on any course syllabus.

“Being able to interact and develop relationships with students from various backgrounds – from Midwestern small-towns all the way to the Gaza Strip – these experiences helped mold and educate me more than anything else,” he says. “The interpersonal skills I learned at Westminster helped me to not only be a successful job candidate but also succeed in my professional life.”

Dashtaki’s success started fresh of out of college, when he beat out approximately 3,000 applicants from Harvard and other universities to earn one of 14 coveted spots for Aetna’s training program.

A Helias High School graduate (Jefferson City, MO), Dashtaki arrived on campus as a freshman football recruit with great expectations for his college athletic career and no idea the pivotal role that the BBIC would play in his life.

“Football was one of the main reasons I went to Westminster,” he says, but after suffering a major knee injury he soon discovered other aspects of his Westminster experience would replace the passion he’d had for playing football.

“At Westminster there are so many student programs and opportunities to get involved – you can do and be a part of whatever you want to – you can’t get that same experience at a large university.” Majoring in finance and economics, he became active in BBIC, chess club, Student Government Association, and Sigma Alpha Epsilon (SAE) fraternity, later taking part in internships — first with the marketing department at the Callaway Bank, then with Wachovia Securities in St. Louis, and later with the Missouri State Auditor’s Office— that helped prepare him for his future career.

Dashtaki speaks with pride about his Greek experience, stating that being part of SAE was a highlight of his Westminster experience.  “We had a very diverse group of guys – athletes, international students, legacy SAEs– we had a blast, worked hard, and got along great.”

He also remembers attending the professional etiquette dinner organized by the Office for Career Services. The annual dinner covers everything from tableware placement and advice on establishing a rapport with others to suggestions on ordering entrees that are easy to eat (such as avoiding buffalo wings). “I remember I paid something like $10, which was a lot of money to a poor college freshman, thinking at the time at least I’ll get a nice steak dinner, but ended up learning a lot about professional etiquette – it was a real eye opener and great learning experience.”

Experience with Westminster’s BBIC, including serving as president for two years, helped lead him to his professional success. Through the organization, created 20 years ago when the Westminster Board of Trustees allocated $200,000 from the college’s endowment to create the BBIC, Dashtaki learned how to research, buy and sell stocks.

“In 2007 and 2008, we had 50 students in BBIC, managing a $400,000 portfolio— real money, real risk, real returns,” he says. “This wasn’t an experiment or simulation, but rather a real-time, baptism by fire education.  BBIC is a huge, invaluable differentiator for Westminster.”

As BBIC president, Dashtaki had the opportunity to present a report on the organization’s performance to the Board of Trustees.

“It was my first time presenting to a big group of professionals,” he says. “The Board was very supportive of our student group, and couldn’t believe how we were not only outperforming the school’s endowment, but even the S&P 500 at the time, and they wanted to know why we made the decisions we did – investing in companies like Apple, Under Armour, etc.”

Dashtaki speaks with appreciation for the involvement of Westminster’s alumni, such as Ayers, in the BBIC.

“The alumni do a good job of getting involved on a micro-level. They care a lot about the school’s success — and students’,” he says. “Alumni like Brock and their selfless mentoring, constructive advice, and networking support are at the core of what makes Westminster great.”

Today, as an Aetna Account Executive, Dashtaki lives in San Francisco, working in the financial district and covering the entire Bay Area. He was recently recognized as a member of the President’s Circle at Aetna — representing the top 10 percent of the company’s account executives.