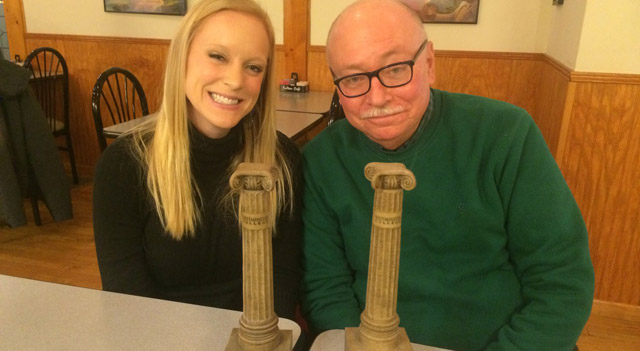 Above, Assistant Professor of Accounting Elise Bartley and Professor of English Wayne Zade, her faculty mentor, with their respective trophies for the Patricia Klein Liebling Parents Association Faculty Award. Zade received the award in 2009, five years before Bartley’s honor.

In 2014, the senior class at Westminster College awarded Elise Bartley the Patricia Klein Liebling Parents Association Faculty Award for her success in educating and inspiring the students of Westminster.

Only four years earlier, Bartley arrived on campus as an Assistant Professor of Accounting, with limited teaching experience.

“I had been a teaching assistant in graduate school,” says Bartley, who worked as an auditor with Ernst & Young in Kansas City before coming to Westminster. “I had taught, but I had never had to plan – that’s a big step.”

She found support through Wayne Zade, the faculty mentor assigned for her first year at Westminster.

Part of the Westminster’s Center for Teaching and Learning, the Faculty Mentoring Program pairs new faculty with tenured faculty members for support. In true liberal arts fashion, faculty learn by stretching beyond the boundaries of their own area of expertise: The mentor pairs bring together faculty from different departments, giving each a glimpse into an area of Westminster education they normally wouldn’t have.

With her accounting focus, Bartley wouldn’t normally have connected with Zade, an English professor known for his love of jazz and poetry. Bartley says the opportunity to have an experienced faculty member to turn to was a boost to her success at Westminster.

“When I came in for an interview, I fell in love with the people and the place,” she says about making her career change and ending up at Westminster. “Everyone made me believe I could do it – they had a lot of faith in me. The mentoring program was so supportive.”

Zade and Bartley met regularly for lunch and visited each other’s classes during that first year. Because the mentor/mentee relationship is not evaluative, but purely supportive, Bartley felt very comfortable asking questions and reaching out for help.

“I think I emailed him every day,” she says. “Having Wayne’s support was very important to me for the learning process.”

According to Zade, the non-evaluative and cross-disciplinary natures of the Faculty Mentoring program are big parts of its success.

“Westminster is very committed to classroom teaching,” he says. “We have plenty of subject-related resources within our departments, but within the liberal arts environment, it’s helpful to get other perspectives and be collaborative. It’s good to witness other teaching styles through the mentoring program.”

Zade says he has been incredibly blessed to have Mary Majerus and Elise Bartley as mentees in the program.

“I’ve learned as much from them as they may have from me,” he says.

Watching Bartley’s transformation from newbie into confident leader in the classroom has been rewarding for Zade. Since that first year, the two have remained friends and keep in close contact.

“This is a place where everyone wants everyone else to succeed,” says Bartley, a mindset that extends to relationships between Westminster faculty and students. “We truly believe, as a college, that our students can succeed and that we can help them.”

“The mentoring program is an embodiment of that philosophy.”