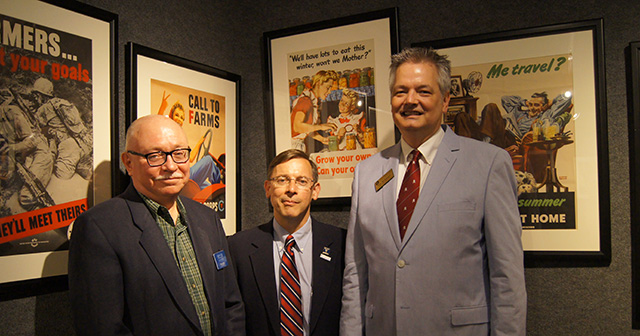 Below, Zade and Riggs share their reflections on serving on the MHC.

The June 2015 Board Meeting of the Missouri Humanities Council in Fulton gave me the chance to reflect on my year and a half as a board member.  I’m halfway through my term now, and already I have seen and done a lot.  In some ways, my career in academic life at Westminster prepared me well to serve on the board; in other ways, I’ve been on a steep learning curve, and I have welcomed the challenge.

The Missouri Humanities Council, according to the thick heavy manual I received at my orientation, “helps Missourians expand understanding of ourselves, our democratic society, and the world by exploring subjects such as history, literature amd encouraging the open exchange of ideas in community life.”  The MHC is, and has been for the past 45 years, an “extension-model” of the National Endowment for the Humanities, for the state of Missouri, one of six states to be chosen by NEH.   In 1976, the state councils were given a new freedom to determine their own programs.  NEH initiatied a policy of providing matching funds to states that could raise cash gifts from grants, and Missouri has used this opportunity.

The Statement of Expectations given to new board members contains eight requirements.  Half of them seem to involve being present–at board meetings, at meetings of committees of the board, at MHC-sponsored events, and in the communities where we live.  Board members need to be present but we also need to contribute ideas, suggest projects, and generally inspire one another and the staff of MHC.  Very importantly, we vote on applications for grants for projects in communities around the state.  So far so good, for me.  In addition, and  this is where it gets trickier for me, board members are expected to assist with fundraising and development activities and assist with government relations activities.  We are asked periodically to contact our state and federal legislators to communicate about issues that affect MHC–i.e., funding issues–by email, phone calls, and also direct meetings. Because I live in Fulton, I have been asked to “press the flesh” in Jeff City a number of times , and I actually found myself stoked about doing this.  This is one of the ways I hope to extend my teaching career after I retire next year.

2015 is actually a banner year for MHC because the Federation of State Humanities Councils national convention will be held in St. Louis, November 5-8.  I attended this convention last year in Philadelphia and had the chance to see the work we do at MHC in the larger national context.  State councils need all the help they can get, and so occasional partnerships between and among states are becoming more common and practical.

The MHC June board meeting in Fulton was special for me because Louis Riggs, a former student of mine at Westminster (class of 1983), is now chair of our board.  Board members had a chance to visit the National Churchill Museum and met Dr. Jim Williams, the director of the Museum, and another Westminster graduate (class of 1986). Louis majored in English, and Jim in history, so our reunion in Fulton was a personal and professional homecoming!

– Wayne Zade, Professor of English, member of the MHC Board of Directors

Chairing the Board of the Missouri Humanities Council has been a logical progression for someone who was fortunate enough to have grown up with Mark Twain and who went to college with Winston Churchill.  The bug definitely bit when I was a child – my father always had plenty of history books in the house – but the die was cast at Westminster, where I worked at the Churchill Memorial and took as many history courses as I could squeeze into my schedule while completing my thesis to graduate with a degree in English.

From a professional standpoint, I have also been fortunate to have lived the humanities by writing a weekly newspaper column for nearly a decade and teaching composition, persuasive argumentation, business law, history of leadership and Introduction to Law School in addition to practicing law. I explain to students the first day of class that they are going to receive a complete liberal arts education in my courses – whether they like it or not – because we cover history, politics, philosophy, and current events in each class, which is precisely what we did on an average day in any course taught at Westminster by Leon Wilkerson.

Chairing a statewide organization has been a magnificent experience.  The Missouri Humanities Council has a mandate to provide programs and services to all of Missouri’s 114 counties.  We are involved in many aspects of lifelong learning, beginning with Read From the Start in early childhood and partnering with Missouri History Day to serve middle school students.  We provide grants to dozens of historical societies, libraries, museums and other organizations for programs, capacity building and workshops across the state. Our writing program for veterans has been so successful that we are now in the 4th edition of our Proud To Be anthology of writings submitted by Missouri veterans.

We are also moving heavily into an area that I have been advocating for the last five years, a county-by-county inventory of historical and cultural assets that will serve as the foundation for enhanced heritage tourism and economic development in rural areas that have been traditionally underserved.

I have also spoken before a number of groups about the importance of the power of story combined with a sense of place to help us play to our strengths as communities. One of our greatest resources as citizens is our shared history and a sense of place serves as a force multiplier when we are moving forward as a community.  We saw that here in Fulton with “The Way We Worked” exhibit that the National Churchill Museum presented in conjunction with the Smithsonian Institute. As good as the Smithsonian material was, the local piece here was so much better that it won a Humanities Award for Exemplary Community Achievement.

The Humanities Council is heavily engaged in advocacy at the State and Federal levels, which has been a joy.  Having been involved in grassroots politics for more than 30 years has been a real plus: working as a Congressional Campaign Media Coordinator as well as working in Congressional offices in Missouri and in D.C. was great preparation for dealing with 197 legislators in Jefferson City and 10 Members of Congress in Washington (as well as their district reps in Missouri).  I have also been able to participate in national humanities events as a presenter on best practices in grass roots advocacy at three national Federation of State Humanities Councils Conferences and have been approved to present again at the 2015 Conference, which Missouri is hosting this November in St. Louis.

Being able to serve alongside my freshman English Comp professor, Wayne Zade, has been extraordinarily satisfying.  It has been great to see him move outside his comfort zone dealing with legislators and his willingness to utilize submissions from our Proud To Be anthologies in his courses has led to a submission of his own:  an essay about the experience for publication by the Humanities Council.

Chairing a meeting in Fulton, however, is nothing new, since Westminster offered so many opportunities to lead in so many organizations through the Student Government Association, Publications Board, the Honor Commission, honorary fraternities and Delta Tau Delta.

Speaking of force multipliers, I am firmly convinced that leadership becomes part of our DNA after we pass through the Columns.