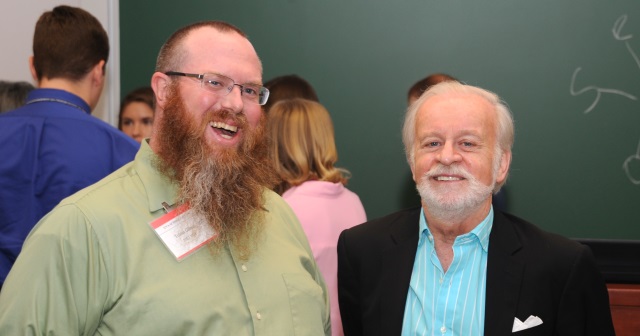 Prof. Tobias Gibson describes his trip to the National Security Law Institute as one of the “best experiences of his professional life.”  He is pictured above with John Rizzo (right), former Acting General Counsel of the CIA.  Here, Prof. Gibson describes the experience in detail.

The NSLI featured some of the best and most influential national security attorneys in the country. The list of teachers was a “Who’s Who” list which included:

The program also had guest speakers at some dinners, including James Woolsey, former Director of Central Intelligence.

Learning about national security law from some of the nation’s most experienced and prominent national security lawyers was an amazing opportunity. The classes ran a wide array of topics, including human rights, laws of war, use of “drones”, civil liberties issues related to national and homeland security, cybersecurity, and many others.

The participants in the class included a few academics, several members of the Judge Advocate General corps from most of the military branches, and several attorneys from the Department of Homeland Security, Department of Defense and other agencies. There were also international participants from Canada, Belgium, Mexico and Australia.

The majority of the participants were housed at the same hotel, which afforded many additional opportunities for discussion of class material and a deeper learning experiences before and after class every day.

The location allowed me to visit Monticello, Thomas Jefferson’s home and Montpelier, the home of James Madison, one of my heroes.

However, one of the biggest highlights of NSLI was when John Rizzo, who the L.A. Times has called “the most influential career lawyer in CIA history”, joined several of the participants for an informal discussion of national security law and the state of the world.

All in all, attending the NSLI was an excellent opportunity to learn much more about national security law from those practice and teach the subject nearly every day. I met thoughtful, important, interesting people who gave me the opportunity to improve my research and teaching.