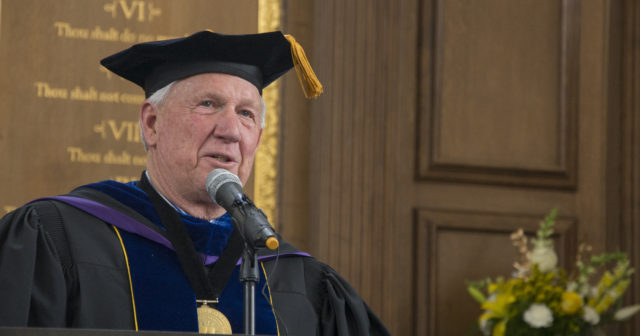 President Lamkin spoke to a full house in the Church of St. Mary the Virgin, Aldermanbury, following his installation as the 22nd President of Westminster College on Saturday afternoon, April 21. 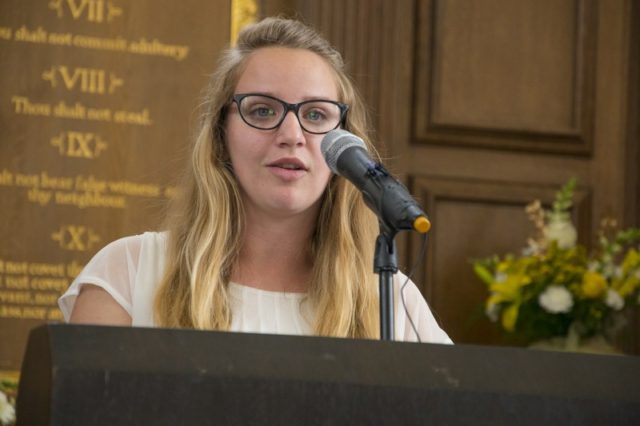 Greetings from the students were given by Lydia Creech ’19, Student Government Association President. Creech expressed that President Lamkin “has a plan for the future and has been committed to knowing and meeting with students on a daily basis. As a result, there has been a general sense of relief and stability among the students.” 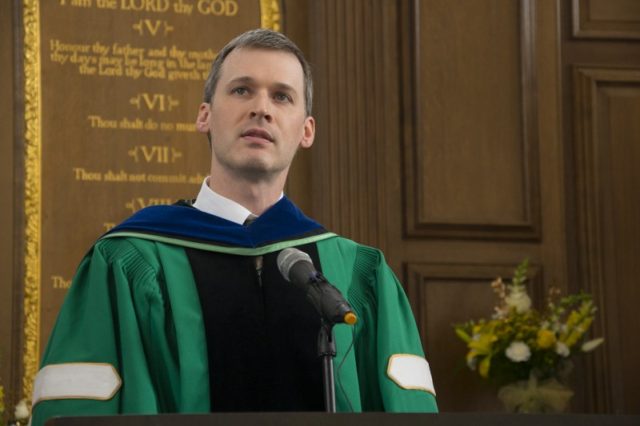 Dr. James McRae, Vice Chair of the Faculty and Professor of Philosophy and Religion, brought greetings from the faculty. He stated: “Since he left the College in 2007, we have faced a number of challenges, but Fletch has proven that he can overcome any challenge to help this College achieve its full potential. Fletch is the general…the statesman…and the President that we need at this time.” 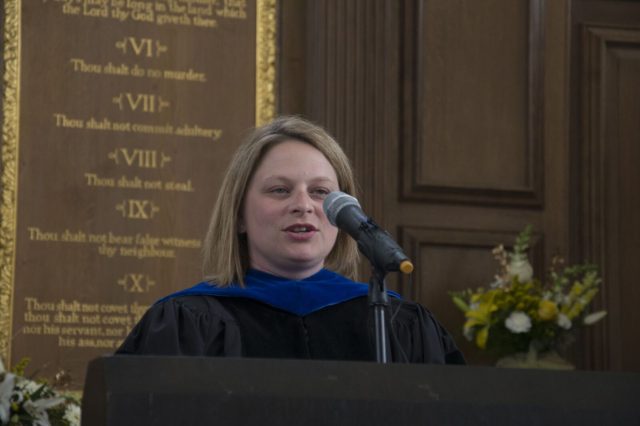 Kristen Jackson ’06, President of the Alumni Council, extended greetings from the alumni. “As a whole, higher education is facing challenges, and Westminster is not immune to those challenges,” she said. “However, with President Lamkin’s unwavering leadership, Westminster will prevail.”

William Woods University President Jahnae Barnett, who was unable to attend the installation ceremony, sent word that she “looks forward to working closely with Dr. Lamkin as together we continue to strengthen our respective institutions to the benefit of both.”

Following the presentation of the presidential medallion and investiture of office by Westminster Chairman of the Board John Panettiere ’59, President Lamkin delivered these remarks to the crowd:

Thank you so much for being with us on this special occasion for Cindy and me. Coming back to Westminster has been one of the best decisions of our lives…returning where our hearts are.

As I thought about what I wanted to share with you today, the words of a great Missouri baseball player kept coming to mind. A 15-time All-Star, three-time American League MVP winner, and 10-time World Series champion, St. Louis’s own Yogi Berra is a baseball icon.

I believe one of the reasons he is so universally admired is because he was probably the greatest catcher in baseball—not through sheer athletic talent but because of his hard work, durability, and consistency. Those characteristics are as American as apple pie.

What many people don’t know is that Yogi was also a war hero. He was in a rocket boat on D-Day at the Normandy invasion and later in the war earned the Purple Heart.

However, what Yogi was well known and loved for as well as his superiority on the field was his memorable quotes off the field. Yogi would make these pronouncements that people found funny for their nonsensical nature. They seemed off the wall, yet when you really think about them, they make a strange sort of sense.

When people would tell his old manager Casey Stengel what a funny character Yogi was, he would say: “You say he’s funny. Well, he has a lovely wife and family, a beautiful home, money in the bank, and he plays golf with millionaires. What’s funny about that?”

I don’t know about you…but that sounds pretty smart to me. One of Yogi’s most well-known sayings is: “When you come to a fork in the road, take it.” I knew exactly what Yogi meant when I first came to Westminster. I came to the drive up the Hill, and it said “Lamkin Drive.” So I felt like they had really rolled out the red carpet for me.

But as I drove up the Hill, there was no red carpet…not even a lush lawn. Honestly, there was not much to cheer about. The sidewalks were crumbling. The drive had potholes in it. The campus looked shaggy and decaying. And I didn’t see anything that resembled a President’s office. So when I got back to the bottom of the hill, it was like Yogi said—there was a fork in the road. I could turn right and go back to St. Louis and forget I was ever here, or I could turn left and go back up the Hill to find the office. I turned left. And I’ve never been sorry.

Those seven years that I was President were some of the best of my life. Together we were able to accomplish a great deal in improved enrollment, fundraising, alumni engagement, student retention, and transforming our campus and converting the Churchill Memorial into a world-class Museum. And along with it, I was privileged to make some lifelong friends and get to know so many wonderful students who have gone on to very successful, happy lives. 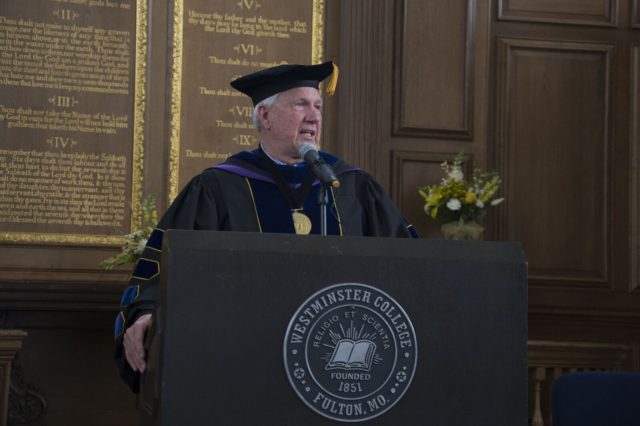 Returning to campus as Yogi would describe it is “like déjà vu all over again.” Same great people. Same great campus. Same great alumni. As I have said before, I would not have left my former presidency at West Virginia University for any other place but Westminster. Yet something seemed to be missing…and the more I was here, the more I realized what it was. Thankfully, the love for Westminster and its rich traditions which have sustained it for 167 years is intact.

But somewhere along the way the focus on our mission and the indomitable Blue Jay spirit that have separated Westminster from any other college and university in the world have faded. As Yogi would put it: “You got to be very careful if you don’t know where you’re going, because you just might not get there.”

Well, folks, I’m here to tell you today we know where we are going and we’re going to get there. Our Board of Trustees and I have come forward with a visionary strategic plan that is already showing dramatic results. John just shared some of the exciting progress we have made a couple of minutes ago. And we’re just getting started. 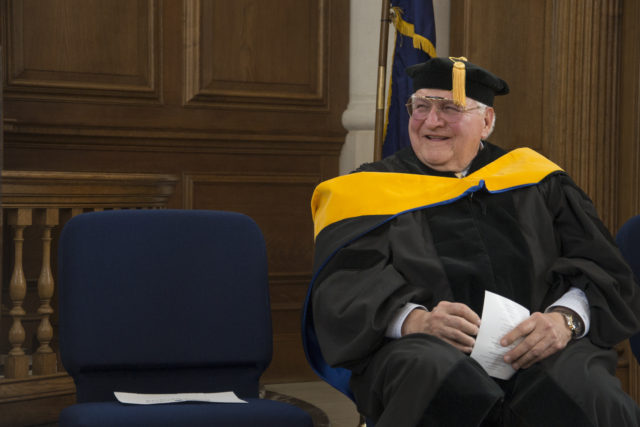 Most important of all, I want to see us recapture the true spirit of Westminster…that confidence…that passion…that optimism which makes the impossible possible. We’ve witnessed those extraordinary events time and time again. Who would ever imagine that the greatest statesman that ever lived would deliver one of the greatest speeches ever made right here on our small campus in the middle of the Midwest? But it happened.

Who would ever dream that over 700 tons of stone from a 17th century London church lying in ruin could be brought across the sea and be resurrected from its ashes into the magnificent memorial found on our campus today? But we did it.

Who could ever guess that the German government would give Churchill’s granddaughter eight panels of the actual Berlin Wall which they were selling for $20,000 a piece, and she would bring those 6,500 pound slabs all the way here as the breathtaking Breakthrough sculpture on our campus that draws visitors from all over the world? No one.

And what other college or university exists where year in and year out the greatest world leaders come to bring the most significant messages, not for some enormous fee, but because they want to stand where Churchill stood. Nowhere but here.

And who would believe that some of our nation’s most significant businessmen, doctors, lawyers, educators, political leaders, and private citizens would graduate from our great, small college? No one. 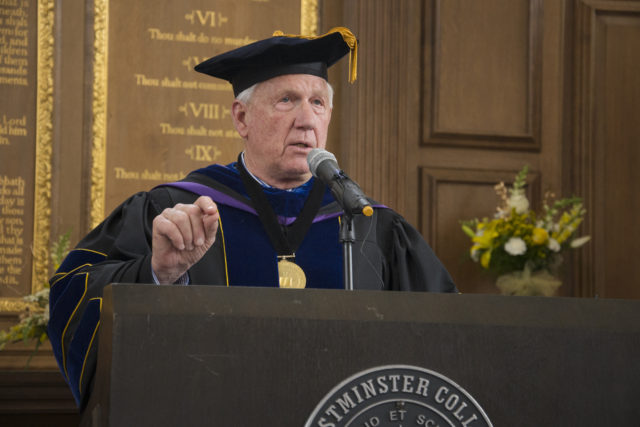 All of these things happened because we dreamed big. So that’s what I have come to ask you today. I’m committed to dreaming big. That’s the Westminster Way. We have the true vision. We have the right mission. And we have the strong passion to take Westminster into the next century. So join us.

President Lamkin’s delivery of these remarks can be viewed here. 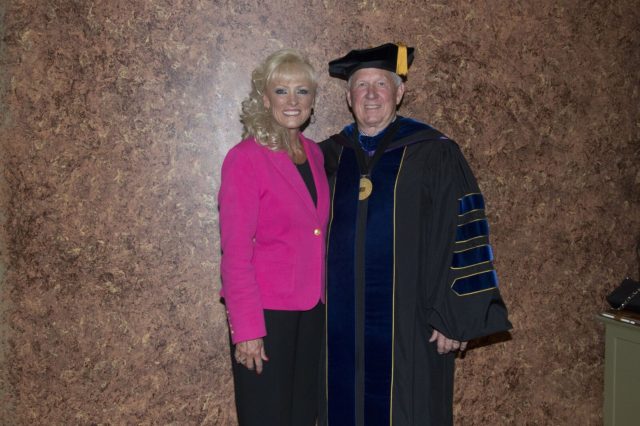