President Forsythe Announces Plans to Retire at End of 2014-15 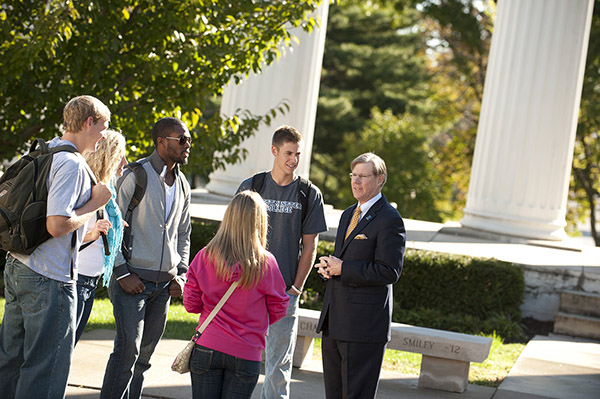 After almost a decade of service, Westminster College President Dr. George B. Forsythe has announced his intention to retire as President of the College at the end of the 2014-2015 academic year.

Dr. Forsythe came to Westminster in 2005 as Senior Vice President of the College and Dean of Faculty following his retirement from the U.S. Army in the grade of Brigadier General after 35 years of commissioned service. Since his appointment as the 20th President of the College in 2008, after serving as Acting President since October 2007, Dr. Forsythe has been transparent with the Board of Trustees and the College’s administrative leaders about his planned timeline of service.

“I have always considered the completion of Westminster’s Higher Learning Commission reaccreditation process in the spring of 2015 as a natural time for a presidential transition, and my decision to retire next summer is consistent with that timeline,” says Dr. Forsythe. “Making this announcement now allows the College adequate time to plan and implement a successful transition. I and my wife Jane want to ensure that the timing of our retirement is in Westminster’s best interest and builds on the great momentum we have created together over the last seven years.”

During his Presidency, Dr. Forsythe led the development and on-going implementation of the College’s Strategic Plan 2020, as well as a large number of changes in all aspects of the College that have allowed it to implement its mission and be positioned for success.

“On behalf of the Westminster Board of Trustees, we sincerely appreciate President Forsythe’s decision to provide adequate time for a well-planned transition,” says Wallace L. Head, Chair of the Board.  “The Board of Trustees, the administrative structure of the College, and the entire Westminster team have become much stronger during his tenure. Dr. Forsythe’s especially strong relationship with the Board has helped Westminster achieve its goals, and the College is well positioned for further success in the years to come. Dr. Forsythe and Jane have had enormous impact on the entire Westminster community, and when they retire next year, they will be greatly missed.”

A significant market research study, authorized by President Forsythe, will conclude at the end of this month. Over the next year, he plans to see the successful completion of its recommendations, the establishment of new initiatives to diversify revenue streams, the establishment of new enrollment management processes to attract and retain more students, and the continuation of Westminster’s comprehensive campaign for endowment development.

“Jane and I have been honored to serve the Westminster College community for the past nine years, and we look forward to making it a complete decade,” says Dr. Forsythe.  “We have given and will continue to give our full measure to the College, and we have enjoyed every minute of our time in the Blue Jay Nation and the special community of Fulton.”

“I have been blessed with great colleagues on the cabinet, faculty and staff. The students are wonderful and have always been the reason for coming to work every day. The successes the College has achieved over the past seven years are a credit to the people who are Westminster.”