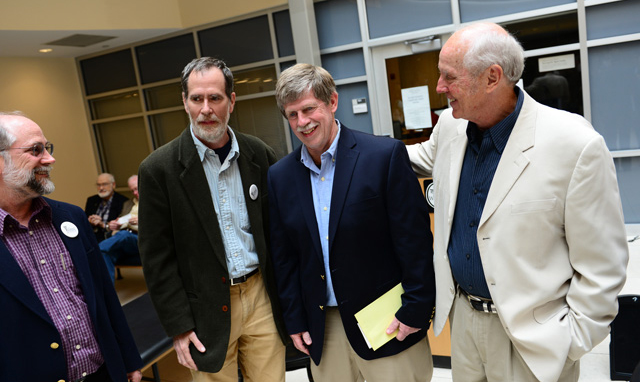 “Ted has been one of Westminster’s most unsung heroes for the past 24 years,” says Dr. David Jones, Associate Dean of Faculty. “His steady leadership of the psychology department has resulted in an excellent curriculum for psychology majors and minors, a culture of undergraduate scholarship, and a legacy of post-graduate success for students, including 75 students who have completed a graduate degree.”

Photos from the Alumni Weekend reception for Dr. Jaeger.

We are gathered here to celebrate the distinguished career of Professor Ted Jaeger, but also to say good bye to one of the truly outstanding members of the Westminster faculty, who is retiring at the end of this semester and moving to Gainesville, Georgia. And this is thus a bittersweet moment for the college and in particular for the many members of this community, who regard Ted as a close personal friend.

Ted has been a great teacher, an inspiring mentor, a wonderful colleague, a productive scholar, and an indefatigable “service” workhorse for 37 years. Ted is now in his 24th year at Westminster but before coming here he taught for 13 years at Methodist College in North Carolina. During his career at Westminster, Ted has taught more than 15 different courses, supervised 26 psychology theses, and helped scores of students present papers at off- campus conferences, based on experiments they conducted in the psychology lab that he was instrumental in creating.

Ted started publishing his research findings when he was a doctoral student at the University of Georgia, and since that time, he has written 24 peer-reviewed articles, presented 13 conference papers, received 10 grants and established himself as a major contributor to his discipline’s understanding of the psychology of perception and visual illusions.

Since arriving at Westminster in 1991, Ted has served on 25 committees, including Personnel, Executive, Assessment, and Curriculum. As a member of the Curriculum Reform Task Force, he was primarily responsible for designing “New Foundations,” the college’s General Education program. As Chair of the NCA Steering Committee, he directed the preparation of the college’s 2005 Reaccreditation Report and this year he served on the NCA Steering Committee and as Chair of its Criterion Two Subcommittee. On top of all this, Ted has served as Chair of his department for seventeen of his 24 years here, and he was instrumental in making Psychology one of Westminster’s strongest and most popular programs.

Ted Jaeger is the model, the paradigm, the apotheosis of what a professor at a quality liberal arts college should be and do. But even more than this, Ted is a genuinely nice guy, a true gentleman, and a fantastic person, who is liked and respected, as far as I can tell, by everyone who has had the pleasure of getting to know him.

I have been calling 642-6779 basically once or twice a week for 24 years, to ask Ted to play tennis, to discuss some new discovery in psychology or political science, or just to talk about Westminster, the Cards, life in general, Westminster and more Westminster. It’s hard for me to accept that in a few weeks I will never call that number again.

Ted and I have played thousands of sets of tennis as doubles partners and singles rivals. With Ted carrying us, we have won the men’s doubles championship in the Senior Show Me Games three or four times and, even sweeter, achieved innumerable victories over, um, Sam and Victor. During all these matches, despite my ranting and raving, screams of anguish and funks, Ted has never said a cross or harsh word to me. Instead, he always tried, great psychologist that he is, to say something positive. When I would say something like “I have zero athletic ability,” Ted would reply, “well, you hit a great running forehand last game and if you can do it once you can do it again.”

Ted has been one of the very best friends I’ve had in my life. I’m so sad that he will be leaving Westminster and Fulton. I wish him and his lovely wife Susan a long, happy and rewarding retirement, filled with lots of tennis, fun, and Georgia Bulldog sports. We can still talk regularly on the phone or via email. But I hope Ted and Susan will come back to Fulton regularly to attend Alumni Weekend, to socialize and reminisce, to play tennis in the Show-Me Games or against Victor and Sam or Sam and Coach Dyson.

Thanks, Ted, it’s been a pleasure and honor to have you as a friend, and I know there are many other here who would say the same thing.