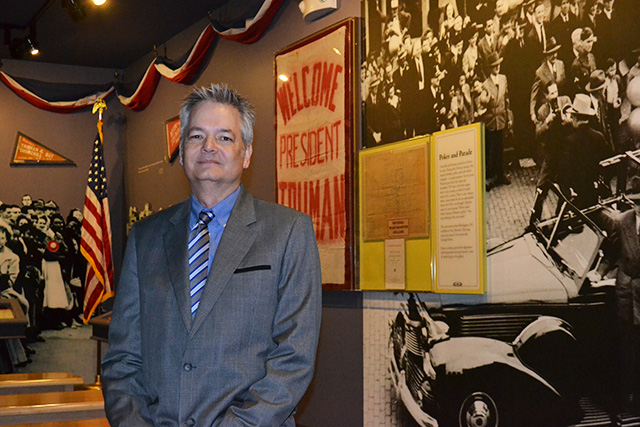 A Westminster graduate who has headed the Albert Gore Research Center for the past six years has returned to the College to guide the future of the National Churchill Museum.

Dr. James H. Williams, Class of ’86, was selected after an extensive national search to be the new Executive Director.

“While a student at Westminster and park ranger at the Truman home in Independence, I developed an interest in the Churchill Memorial project, which was the subject of my senior thesis, Churchill’s visit to Fulton in 1946 and the relationships between Churchill and Truman,” says Dr. Williams. “I believe my experience as an academic administrator, faculty member and historian as well as my thirty-year association with the Museum and Memorial as a member of the Class of 1986 and a Churchill Fellow made me an ideal candidate for the position.”

Dr. Williams has served as Director for the Albert Gore Research Center and a Professor of History at Middle Tennessee State University from August 2008 until December 2014.

In this position, he led the archive, museum, and educational organization at Tennessee’s largest undergraduate university.  As a part of his duties, he supervised 14-16 people, was principal fundraiser and development officer, program and grant writer, and was responsible for all aspects of budget management.

Overlapping with his work as Director of the Gore Research Center and Professor of History, Williams served as Coordinator for the American Democracy Project from 2007-2009.

Dr. Williams has worked in the History Department at Middle Tennessee State University since 1996, first as an Assistant Professor (1996-1998), then as Associate Professor (1998-2005) and finally as a full Professor (2005-present).

He is currently working on three book manuscripts, has given over 30 academic paper presentations at national meetings, and published a dozen articles in distinguished journals.

In 2000 he was elected a Churchill Fellow at Westminster.

Dr. Williams worked as a tour guide at the Museum, which was then called the Winston Churchill Memorial and Library, from September 1984 to May 1986, when he was a student at Westminster.

“I am amazed at how much the College and Memorial/Museum have changed since I was a student at Westminster,” says Dr. Williams. “I relish the opportunity to return to Missouri and continue to move the National Churchill Museum forward and expand its role in the Westminster community and beyond.”

PHOTO ABOVE:  Dr. Jim  Williams, new Executive Director of the National Churchill Museum, poses in the Sinews of Peace Room in the Museum located on the campus of Westminster College in Fulton, MO.