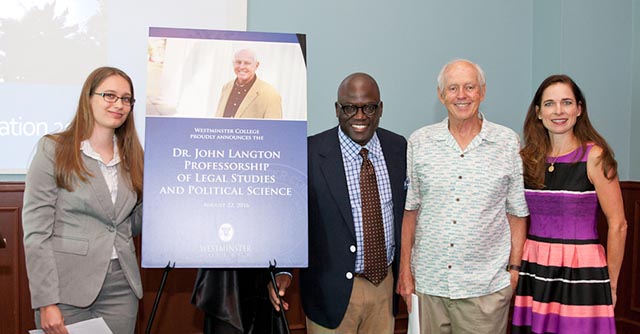 The first named  professorship ever to be funded in the Westminster College political science department was announced at the opening faculty meeting for the 2016-2017 academic year.  A team of former students came forward to lead the effort to raise over $1 million in commitments to fund the Dr. John Langton Professorship of Legal Studies and Political Science.

“I want to thank the more than 180 individuals-former students, faculty and staff, family and friends-who have made donations to help endow the Langton professorship,” Dr. Langton told the crowd.  “But in particular, I would like to thank Jim Bennett (Class of  1992) and Phil Boeckman (Class of 88) for launching the whole project and for supporting it so generously with their time and treasure. I would also like to thank Elizabeth Cole (Class of 94) who early on  joined the project leadership team with Jim and Phil.”

“One of the first things that anyone can tell you about Westminster is that faculty make this great school what it is,” said  President Akande in his remarks. “It is my honor to stand before you today and recognize a faculty member who has dedicated his career to the success of his students, our Westminster alumni, for 35 years.”

Dr. Langton has been Chair of the Political Science Department on a rotating basis for over 20 years.  He has chaired the Westminster Legal Careers Program since the 1980s and helped more than 200 students attend many of the country’s most prestigious law schools.  Six of his students have earned Ph.Ds. in Political Science, and another one is currently a doctoral student at Washington University, where the chair of the department is a former student of Professor Langton.

Dr. Langton told the group he plans to teach a few more years but once he retires, he would like to “work as a volunteer to help establish named scholarships and positions for some of the many outstanding Westminster professors who deserve that recognition.”

President Akande and Dr. Perry presented Dr. Langton with a certificate in honor of the occasion.

“Thank you once again to all of the alumni who have contributed so far to this effort and to those who are ready to make their commitment,” said President Akande. “Your gifts do more than honor one of our great faculty members. They change the lives of our students.”

Funding is ongoing for the professorship and gifts of all sizes are still welcome at www.westminster-mo.edu/giving.