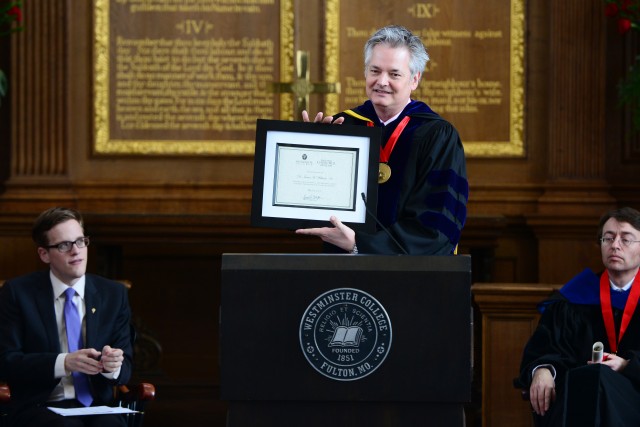 Above, Dr. Jim Williams displays a certificate recognizing his selection as Westminster’s first Professor of Churchill Studies, a position made possible by a significant new gift to the College.

On March 8, 2015, following the Enid and R. Crosby Kemper Lecture, Westminster College President George B. Forsythe announced a significant gift that will help the College fulfill its dream of elevating the National Churchill Museum on the national and international stage.

Dr. Monroe E. Trout and his wife Sandra from Appleton, WI have established a Professorship of Churchill Studies, which will provide the Museum with an Executive Director and the necessary resources to raise its profile and move to the next level of excellence.

Selected as the first to hold the Professorship of Churchill Studies made possible by the Trouts, Dr. Jim Williams joined the National Churchill Museum as Executive Director in December 2014.  A graduate of Westminster, Williams headed the Albert Gore Research Center in Tennessee for six years before returning to his alma mater for this position.

“The Trout Endowed Professor of Churchill Studies has allowed us to employ someone of Dr. Jim Williams’ stature to guide the future of the Museum,” says President Forsythe. “Resources are now available to fund professional development opportunities for Jim so he can research and publish in the most prestigious scholarly journals and present at the most prominent Churchill events in the world.”

The Trouts are particularly interested in seeing that some of the top traveling exhibits come to the Museum, and this new endowment makes that goal possible.

Dr. Trout has been a major force in the health care industry for over 40 years, serving on boards and creative teams of eight different industries. He attended the University of Pennsylvania Medical School and holds a law degree from Dickinson Law School.

His wife Sandy is a native of Appleton and attended the University of Wisconsin in Madison.

“On behalf of Westminster College and the National Churchill Museum, I want to publically thank Monroe and Sandy Trout for their extraordinary generosity,” said President Forsythe. “We regret they were unable to attend the lecture.”

At the lecture held at the National Churchill Museum on campus on Sunday, President Forsythe presented Dr.Williams with a certificate to recognize the establishment of the Sandra L. and Monroe E. Trout Professorship of Churchill Studies.

“Exciting times lie ahead for the National Churchill Museum as this remarkable testament to the life and achievements of Churchill on our campus continues to grow in stature and public acclaim due to the Trout endowment,”  President Forsythe stated.