Westeryears: The Media Invasion of Westminster 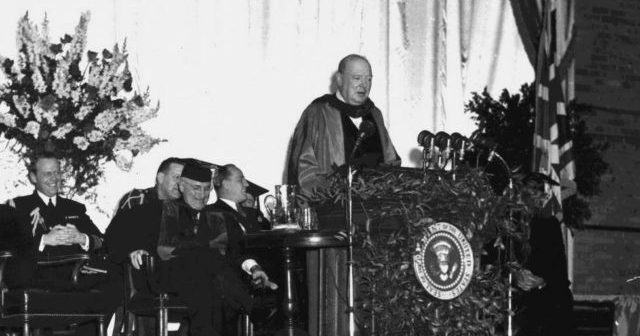 Once the broadcast rights for nation-wide radio coverage had been secured, Central Broadcasting System (CBS) requested exclusive rights, but Westminster President Franc L. McCluer sent word back: “Hesitate to give the privilege of broadcasting this address to one system only…It has been my thought that the address may be one which might appropriately be broadcast over several networks.”

As it turned out, all the major broadcasting companies planned to carry the speech except for the National Broadcasting Company (NBC), who did not want to be one of many. However, when an advance copy of Churchill’s remarks was released to the media while Churchill and Truman were on their way to Fulton, and NBC grasped the significance of the former Prime Minister’s message, NBC made arrangements to transmit the speech through a St. Louis affiliate, KSD, which was already planning on carrying Churchill’s remarks.

An army of workmen descended on Westminster to prepare for the media. Bell Telephone Company had to install additional circuits to handle all the radio networks and media outlets. Desks and typewriters were set up in the basement of the Historic Gymnasium with desks, typewriters, and telephones and Western Union telegraph stations to meet the needs of 400 media representatives.

The largest missed opportunity for posterity was the decision to not broadcast the speech on television. Although television was in its beginning stages, one member of the Westminster Board of Trustees had noticed President Truman’s annual address to Congress was going to be telecast by American Telephone and Telegraph on three stations in New York City and one station in Washington, D.C. This was to be a television first. So the trustee floated the idea to President McCluer in a note, saying: “They might be interested in some kind of thing in Fulton. It would give them good publicity as well as us.”

Seeing a possible great opportunity, President McCluer called on Estill I. Green, a top executive with Bell Laboratories and son of the donor of the Green Foundation Lecture, to look into the feasibility of using television. He returned with an affirmative view and the news that one firm was ready to “go ahead with the project.” Their hope was the lecture could then be televised by closed circuit.

However, when President McCluer contacted Churchill, who was in Florida, about moving forward with a telecast, Churchill was reluctant to do so. He agreed to discuss the possibility with President Truman at an upcoming conference they would both be attending in Washington, D.C. But ultimately, President McCluer received a wire from Churchill stating:”I deprecate complicating the occasion with technical experiments.”  Usually a visionary, Churchill failed to grasp the future impact of what he perceived to be a “technical experiment,” so the opportunity was lost. The Churchill telegram is now part of the permanent collection of the National Churchill Museum.

Joe B. Humphreys ’35, who was fresh out of the Navy and had been an executive with the Boy Scouts before his military service, convinced President McCluer to allow him to handle the public relations for Churchill’s visit. He was appointed Assistant to the President and would stay at Westminster until he died April 19, 1968. A.C. Huber, a St. Louis publicist, was hired as a second assistant, and he was also assigned public relations.

Once mid-January hit, these two men had their hands full. Reporters from all over invaded Fulton to interview anyone who knew anything about the arrangements for Churchill’s visit. Longtime Fultonians who spent their time relaxing curbside at the courthouse square might find their daily routine interrupted by a journalist soliciting their view on the upcoming occasion. Photos of Westminster appeared in newspapers everywhere. One staff writer for the St. Louis Globe Democrat ran a story entitled: “What Would YOU Serve if Churchill and Truman Were to Come for Dinner?”

For the two days before Churchill Day and Churchill Day itself, KXOK radio from St. Louis gained the permission of the sheriff’s office to park its trailer right on the courthouse lawn, where it would broadcast several times a day with interviews from local people.

Chester A. Bradley of the North America Newspaper Alliance described the situation thusly: “Not since Bo McMillan led his Centre teammates to a victory over the football giant of Harvard has the achievement of a small college won its way into the press of the nation like the scoop scored by Westminster College here in securing Winston Churchill as the speaker for one of its annual lectures. Dr. Franc L. ‘Bullet’ McCluer, Westminster President is the McMillin of the current college sensation, the man who fired the shot (words, in this case) being heard, and to be heard, round the world.”

The night before Churchill’s visit, Westminster officials entertained members of the media with dinner at the Fulton Country Club. It was raining that evening, and when a reporter from Tulsa asked President McCluer about a possible rain plan, President McCluer looked him straight in the eye and declared: “The Presbyterians have ordered it dry.”

Some reporters spent the night in the fraternity houses, sharing rooms with students and holding “bull sessions” long into the night to get the students’ perspectives on the event.

When the historic day arrived, the military police had sealed off campus with one-inch wide iron rope strung between posts by 8:00 a.m., and only media, students, college officials, and employees could enter the campus. Guests would not be allowed on site until 15 minutes after Churchill was in place for lunch at Washington West.

Inside the gymnasium, microphones were in place to carry the program from the platform to the radio booth along one side of the gymnasium, where all the networks and the independent stations covering the event could pick it up. Newsreel photographers were set up on a high gallery along the south wall opposite the speakers’ platform. For those who had not been fortunate enough to get tickets for the event, public address systems had been set up to carry the program to Dulaney Auditorium at William Woods, downtown churches, and the courthouse square.

Once the Churchill-Truman entourage arrived with the pair in an open touring car to parade through town, photographers were allowed to step into the street to get their shots, but could not run along the side of the presidential car.

When the dignitaries arrived in front of the Washington West building, photographers were allowed one last photo opportunity before Churchill entered the President’s home for lunch. Because the house had limited space, only the 60 members of the official party, trustees, and faculty were allowed inside. The media waited outside the house for the official party to move to the gymnasium.

The academic procession and preliminary speeches for the event went according to plan. However, with all those people packed into the gymnasium, the heat was stifling. When Churchill rose to speak, he asked the newsreel reporter to turn off his overhead light because the heat and the glare were bothering him.

An experienced Kansas City stenotypist, Emily Miles, was seated below the platform and to one side to make a word-for-word report to be distributed to the press. As she would finish sections of the speech, she would tear off pieces and send them down to the press room for a worker to make mimeographed copies for reporters.

Alumnus Howard B. Lang ’08 from Columbia, Missouri, who was the official reporter for the 13th Judicial Circuit of Missouri, was seated to the other side of the platform, taking down Churchill’s lecture in shorthand. Local Associated Press reporter George Johnson had requested Lang transcribe the lecture. Because of Churchill’s last minute changes in the lecture, having the two transcribe ensured a more accurate representation of what Churchill actually said.

Yet there was still confusion. The Associated Press had come to Emily Miles wanting an accurate version of Churchill’s text because he had deviated from the prepared remarks. Unfortunately, she missed some phrases because of the noise coming from the speakers on the side of the platform over her head. So she ran with a cup of coffee in one hand and a cigarette in the other, downstairs to find Lang, who had retreated to the press room. Because of his years of experience with courtroom noise, Lang had gotten the whole speech. So once the two compared notes, they were able to come up with an official text of Churchill’s address.

The next morning one political cartoonist captured the aftermath. A Fulton citizen was drawn sitting curbside in the midst of the debris of abandoned decorations and pennants with the caption “the captains and the kings departed.”

The captains and kings had indeed departed, along with the media, but Westminster College had enjoyed its glorious day in the sun, and the media continues to write about and reflect on this historic occasion over 70 years later.