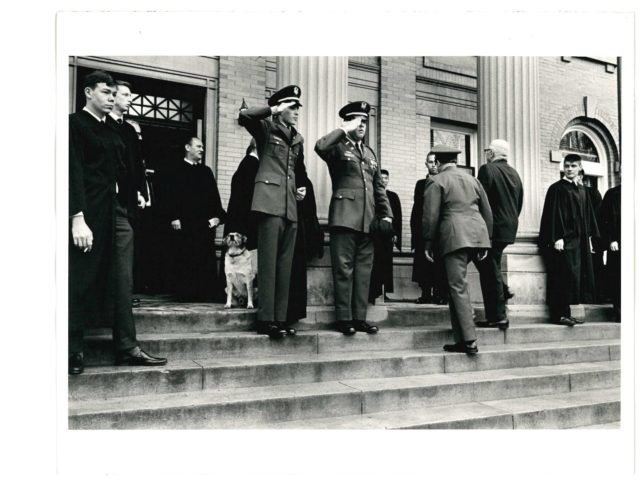 In 1946, Westminster President Franc L. McCluer penned a letter to Winston Churchill inviting him to deliver a lecture at the College.  Before the letter reached Churchill, President Harry Truman added this handwritten postscript to it, “This is a wonderful school in my home state. Hope you can do it.  I’ll introduce you.  Best regards, Harry Truman.”  That note sealed the deal for the Sinews of Peace address by Churchill in Fulton, Missouri, forever-after known as “The Iron Curtain Speech.”

On April 19, 1964, President Truman returned to campus for the groundbreaking ceremony of the Winston Churchill Memorial.  The event took place on the west side of the historic Westminster Columns.  President Truman diligently turned a shovel full of dirt in the shade of Westminster Hall. Photographs of the participants are preserved at the Churchill Memorial and the additional dignitaries in attendance are readily recognizable (e.g. McCluer, Missouri Governor John Dalton).

But, one guest is known only to a select few – he had only a first name and … four legs.  The SAEs at Westminster, like most campus fraternities, had a House dog.  He was, in current parlance, a rescue.  Unlike other fraternity pure-bred mascots, Odis was a “Heinz 57” variety.  He roamed the Westminster campus, proud and perpetually hungry regardless of his regular meals at SAE.  So, it should not have surprised me when I was reviewing Churchill Memorial dedication photographs to find a picture of Odis sitting on the Westminster Hall steps as President Truman happily broke ground for the Memorial.  Odis’s dog years rivaled President Truman’s human years.  My smile rivaled the President’s onlookers.   You are invited to view the magnificent 17th Christopher Wren church which was brought from London and restored on the Westminster College campus as a result of this historic groundbreaking.  Come help Westminster celebrate the 50th anniversary of the Church and America’s National Churchill Museum which is located there on May 3-5 at Churchill Weekend.  Details and registration is found here. 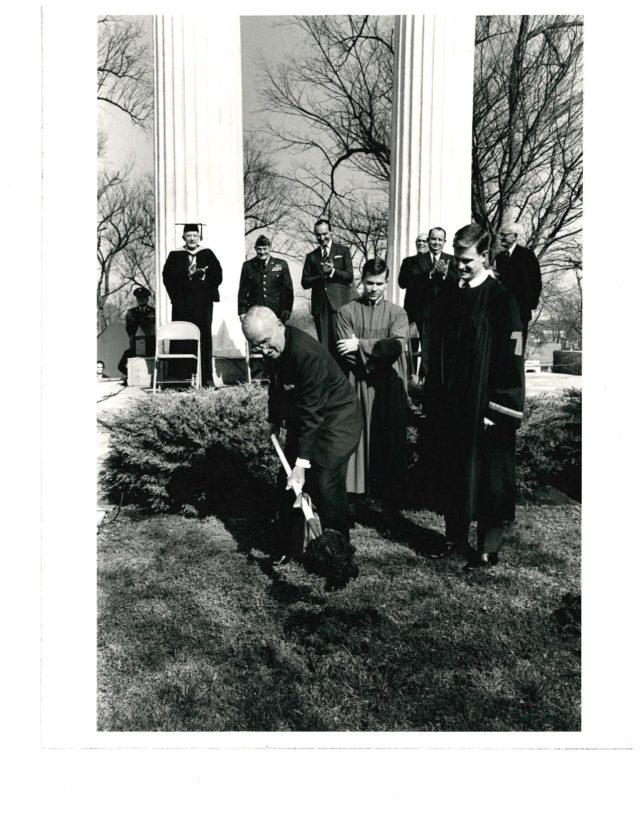