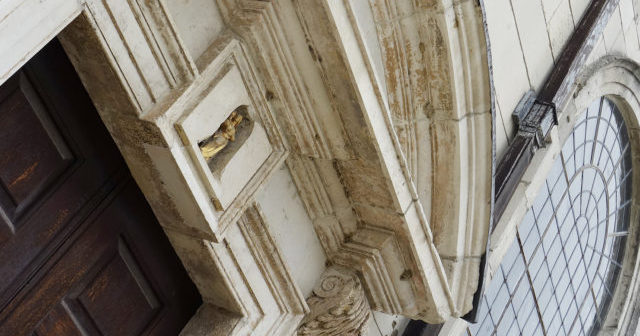 Written by Westeryears Guest Columnist Jenny Grey, Editor of The Fulton Sun, as a two-part article which originally appeared in The Fulton Sun

For years, a mysterious statue has resided in a niche at the Church of St. Mary the Virgin, Aldermanbury. Much of her story has been lost in the mists of time. She’s not even the first statue to live in that niche over the south-side door. At long last, at least part of her tale has been revealed. The following is the beginning of a two-part series that sheds new light on the face of St. Mary.

On April 16, 1965, Miss Ethel Wood, of Hemel Hempstead, Hertfordshire, England, sat down to pen what she felt was a “very strange letter.” In it, she recounted a recurring dream about a tiny statue of St. Mary holding the baby Jesus in her arms.

Her letter and others were recently found in the archives at the National Churchill Museum, Executive Director and Chief Curator Tim Riley said.

“The correspondence is quite fascinating,” he said. “She dreamed about (the statue) and was preoccupied with it.”

Wood’s letter was the beginning of a correspondence with a renowned architect who was instrumental in bringing the Church of St. Mary the Virgin, Aldemanbury, from London, England, to Fulton, Missouri. It ended with the small gold statue visitors see today.

Wood worked in the City of London from 1924 to 1938, and she often visited area churches on her lunch hour to hear organ recitals. In her first letter, she said she didn’t remember ever seeing this statue in its niche over the south door of the church, which had been designed by famous architect Christopher Wren after the Great Fire of London in 1666. Wren also redesigned St. Paul’s Cathedral after the same fiery event.

The stone church stood for 300 years until it was bombed in the fall of 1940 by the German Luftwaffe. At the end of the Blitz, only the walls of St. Mary stood.

About a year later, Wood started having a dream.

“I had the most vivid dream,” she wrote. “I thought I was in Italy, near a monastery, and (I was) told that the statue originated from there …”

The dream also told her the statue was at the medieval version of the Church of St. Mary, the one William Shakespeare was said to have frequented. The original St. Mary church dates back to the late 11th or 12th century as a Catholic parish church, and while it survived both the English Reformation and Restoration, plague and civil war — the Great Fire of London destroyed it in September 1666. The Wren-designed church rose from the ashes between 1672-1679, but no one seems to know for certain anything about the small statue.

Wood said her dream told her the statue predated the Wren church.

The dream scenario was odd for Wood, a Quaker, who said she tried to ignore it.

“However, the same dream kept recurring until about two or three years later, I and a colleague went one evening after work … to the City of London, as I said ‘just to look.’”

By then, Wood was working in Cricklewood, northwest of London.

“All was devastation, and when we reached St. Mary Aldermanbury Church, only the shell of it was standing,” she wrote.

That was the first time she remembered seeing the statue of St. Mary.

“Over the south door we saw, in a very small niche, this little statue,” Wood added.

She and her friend piled up the church’s former building stones and climbed them until she was face to face with the small statue. It was maybe 9-10 inches in height. Wood said she wanted to rescue the statue, but it was firmly fixed. She left it as it was.

Several months went by and the image of the statue nagged Wood. She wrote to the clerk at the Guildhall, London, asking him to see to its safety, but was miffed when he seemed to laugh at the story of her dream.

Wood then learned the vicar of St. Sepulchre’s Church, Holborn, was trying to rescue church items after the bombing.

“One Sunday, I made a special journey and asked him to try and save the statue, and I told him the story as I have written here. He said he would try; whether he was successful, I do not know, but about six months afterwards, when I went to look, the niche was empty,” she wrote.

In her dreams, the statue was marble, but in reality, she said she couldn’t discern the actual material. She mentioned the fine workmanship.

“One could even see the baby’s small fingers carved in stone,” she wrote.

(Part Two of the mystery of the missing St. Mary’s statue will appear in next week’s Westeryears.)