Westeryears: A Glass Raised as the Iron Curtain Descends 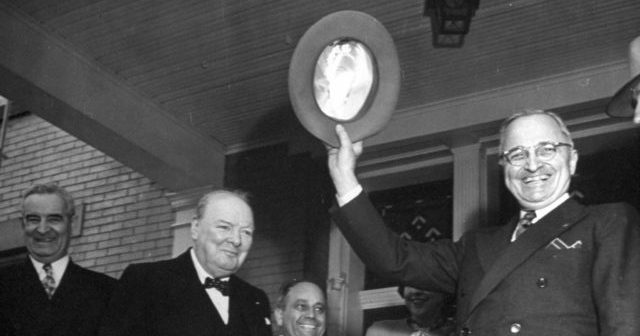 On March 5, Westminster celebrated the 72nd anniversary of Sir Winston Churchill’s historic “Iron Curtain” speech on campus. One of the lesser-known stories from that monumental day concerns Churchill receiving a little fortification via one of his favorite drinks before his oration.

Following the celebrated Callaway ham luncheon held in Washington West for the former British Prime Minister and President Harry Truman, Churchill was escorted upstairs to put on his Oxford robe in preparation for the ceremony. Once Churchill was gone, it occurred to Truman that the Englishman, who was known as widely for his love of alcohol as for his passionate orations, might be ready for a drink. After all, he had endured a long trip followed by the luncheon with dignitaries.

So Truman called Major General Harry Vaughan, his military aide and a 1916 graduate of Westminster, to his side (Vaughan was the one responsible for soliciting a handwritten note from Truman, which appeared on the Westminster invitation sent to Churchill).

Truman told Vaughan: “the Prime Minister hasn’t had a drink in at least three hours and that’s not par for the course for him. You better get one.”

Vaughan was not sure on the spur of the minute where he might look for a shot of whiskey on a good Presbyterian college campus, but he ventured out onto the crowded front lawn of the house to conduct a search. Out of the sea of faces, he found a friend and local alumnus who he felt comfortable asking where he might find a pint of whiskey for Churchill. The man told Vaughan not to go away…that he would return. And return he did, mission accomplished. The man had come back from the neighborhood with a pint of whiskey in his pocket.

Major General Vaughan went to the kitchen, prepared a small bowl of ice with a glass and a little pitcher of water on a silver tray. He went up the stairs, took the cap off the bottle, set the tray on a table in the upstairs hall, and knocked on the door.

Churchill told him to come in and when he opened the door, Churchill was sitting in his scarlet robe with a black Tam-O-Shanter customary for Cambridge students to wear.

Vaughan said: “Mr. Prime Minister, the President seems to think that you need a little sustenance before you go over to make that speech.”

To which Churchill replied: “General, I am certainly delighted to see that. I was sitting here cogitating whether I was in Fulton, Missouri, or Fulton, Sahara.”

Churchill poured out a hefty slug of whiskey and downed it instantly.

Now he was fueled and ready to deliver what most historians believe to be the most important speech of the 20th century.