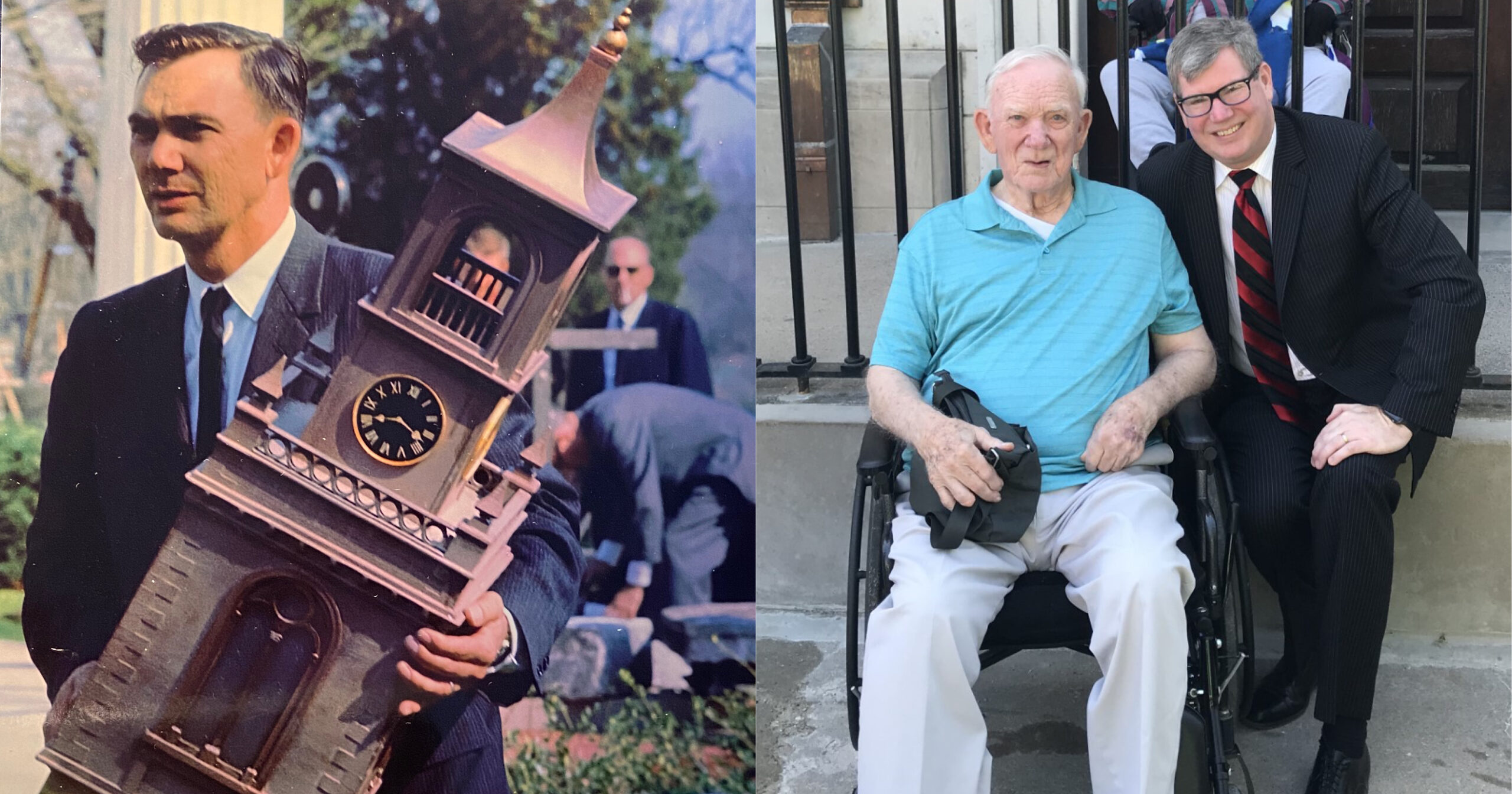 Above, far left, Earl O’Roarke, ’51, delivered a scale model of the Church of St. Mary the Virgin, Aldermanbury, to campus during a groundbreaking ceremony on April 19, 1964, where he met former President Truman. He visited with Timothy Riley, the Sandra L. and Monroe E. Trout Director and Chief Curator of America’s National Churchill Museum, far right, last fall at ANCM.

While we are reminded at this unprecedented time to care for the most vulnerable — especially those over the age of 60 — Westminster College recently received a welcome surprise concerning an older alumnus. The scenario illustrates how our Westminster community members stay connected with one another. 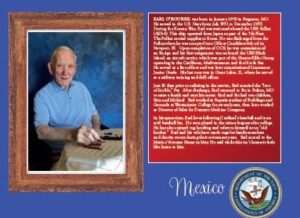 The calendar tribute included a current picture of O’Roarke and a lengthy description of the U.S. Navy veteran. Riggs forwarded the information to Westminster on March 4. The Republican state representative for Legislative District 5 wrote, “Just received this calendar at the Capitol. Imagine my surprise when I opened it up and saw Earl O’Rourke on the first page!”

The feature Riggs forwarded details O’Roarke’s assignment to the USS Pollux in Japan during the Korean War. The write-up details the Ferguson, MO, native’s time in Officer Candidate School in Newport, RI, and information about his commission on the USS Block Island, an aircraft carrier with the Hunter-Killer Group.

The biographical account includes one simple sentence about O’Roarke’s civilian life as a Westminster employee upon moving back to Fulton years after earning a degree in economics: “Earl worked as Superintendent of Buildings and Grounds at Westminster College for several years and then later worked as Director of Sales for Danuser Machine Company.”

Those who know O’Roarke’s storied history at the College jumped to fill the gaps in that sentence.

Timothy Riley, the Sandra L. and Monroe E. Trout Director and Chief Curator of America’s National Churchill Museum, notes that O’Roarke was part of the massive rebuilding project of St. Mary the Virgin, Aldermanbury, after the stones were shipped to the United States from London, England.

Riley says O’Roarke carried out many of the tasks needed to prepare the campus site and ultimately build the Winston Churchill Memorial and Library, later designated by the U.S. Congress as America’s National Churchill Museum (ANCM). O’Roarke even delivered a scale model of the church to campus during a groundbreaking ceremony on April 19, 1964.

After former President Harry S. Truman ceremonially turned the first shovel of soil to begin the Memorial project, O’Roarke suddenly found himself standing next to Truman at the request of Secret Service.

“He shook the hand of the most famous Missourian who previously accompanied Winston Churchill to the College in 1946, and the president leaned over to Earl and said, ‘I guess you’re the one stuck with the old man,’” Riley says. “Earl replied, ‘It is an honor, Sir.’”

Riley adds that O’Roarke and his wife, Patricia, are founding members of the Friends of America’s National Churchill Museum and among the longest-serving members of that group, renewing their membership annually for more than 40 years.

O’Roarke visited ANCM in October 2019 with a group of other veterans from the Mexico Veterans Home, where he now resides. On their way into the historic church, O’Roarke took the time to speak with several contractors engaged in the current preservation efforts.

“Brimming with pride, Earl told several of the workers about his role in the building of the church on campus,” Riley recounts. “Then he said to them with his characteristic smile, ‘It’s your turn to take care of her now.’”

Westminster College thanks O’Roarke for his important role in campus history and his dedication to ANCM. Our thoughts are with all of our alumni during this difficult time, especially the most vulnerable.