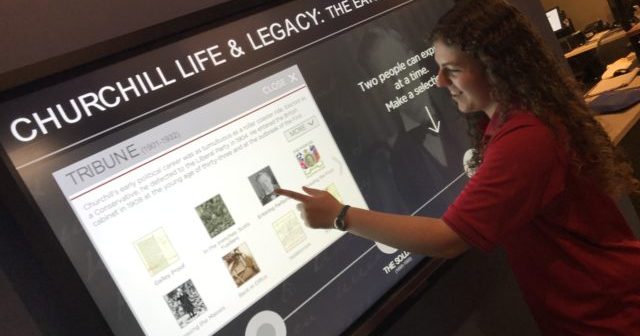 Visitors to the National Churchill Museum can now enjoy an exciting new interactive permanent exhibit as a part of the ever-changing experience offered at this campus treasure.

The Churchill Life and Legacy Interactive Exhibit is composed of three massive touch screen monitors, each over 60″, which provide a timeline of Churchill’s life from early childhood to his death in 1965.

The new exhibit is located in the Mr. and Mrs. Stephen F. Brauer Leadership Corridor, located just past the admission desk. 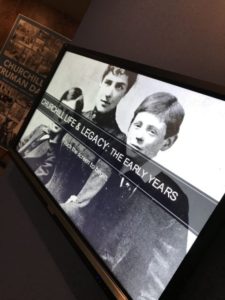 When a visitor touches the screen to reveal a specific time period in the exhibit such as “Churchill the War Years” or “Churchill the Elder Statesmen,” documents, photos, letters, and speeches are revealed from that era for study.

The resources for the exhibit have been taken from the largest and most important collection of Churchill archives in the world, found at Churchill College which is part of the University of Cambridge.

The exhibit was originally commissioned by the new National Churchill Library and Center, which is housed on the campus of George Washington University in Washington, D.C.

“We are very grateful to the Churchill Library for giving us access to this exhibit, which they had created at great expense,” says Riley. “And we owe a great debt of gratitude to those whose generous donations made it possible for us to mount this exhibit.”

This new exhibit was made possible by the generosity of The International Churchill Society, Mr. and Mrs. Jean-Paul Montupet, and the estate of Laddie Hamilton III. Mr. Hamilton was a Churchill Fellow and devoted Churchillian. 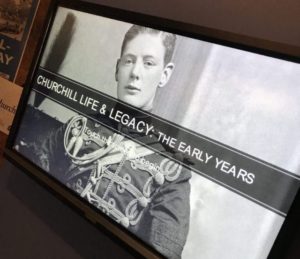 The material in the exhibit, much of which is original documents, is not only easily accessible and easy to read, but multiple people can view the screens at one time,” says Riley.

According to Riley, up to six people can do their own individual research or in the case of class field trips, 12-18 people can access the exhibit at one time.

The new exhibit is designed so that visitors can spend a few minutes on one specific topic or spend hours to experience the exhibit in its entirety.

“At the National Churchill Museum we continue to provide an interactive experience between content and visitors that is cutting edge,” says Riley. “Our exhibits help history come alive and keep Churchill’s lessons fresh in people’s minds as well as attracting younger generations to learn and become inspired by Churchill’s legacy.”