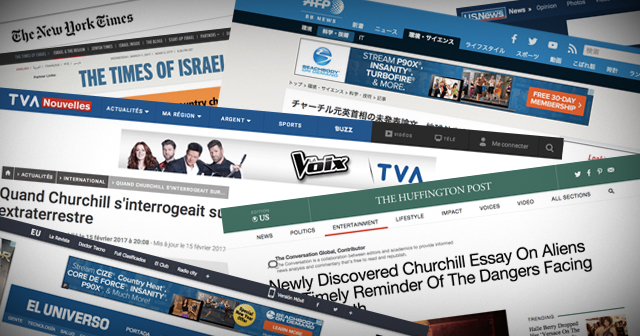 A recent find in the archives of the National Churchill Museum has developed into an international news story that revealed Winston Churchill was clearly open to the possibility of extra-terrestrial life on other planets.

Churchill wrote the 11-page draft essay in 1939, and revised it slightly in the 1950s. It was buried among four boxes of materials that were donated some-30 years ago to the Museum, where it sat in the archives until its rediscovery last year.

The essay was found by Timothy Riley, the Sandra L. and Monroe E. Trout Director and Chief Curator of the museum, while searching for other historical materials regarding another research project.

He provided the essay to Westminster science faculty and renowned astrophysicist Mario Livio, during his Hancock Symposium lecture at Westminster College last fall, seeking their insights about the validity or the accuracy of Churchill’s astrological perspective.

The excitement grew even more when the faculty members and Livio expressed great amazement over Churchill’s faith in science and his belief in potential alien life on other planets. Riley then authorized Livio to write an extensive article about the essay for Nature, a prestigious science journal.

The article, which was published February 15, touched off a series of news stories in the New York Times, USA Today, Washington Post, The Huffington Post, U.S. News & World Report, The Guardian, Reuters, Agence France-Presse (AFP), AFP Japan, the South China Morning Post, the Times of Israel, El Universo, El Diario, and Xinhua, the official news agency of the People’s Republic of China. And the story continued to grow.

Newsweek, Smithsonian, the Christian Science Monitor, The Independent, the Times of London and hundreds of other publications began using the news story, followed by regional, national and international broadcast outlets, from NBC to Fox News to National Public Radio (NPR) to the British Broadcasting Corp. (BBC), as well as Yahoo, and dozens of major online news portals worldwide.

In just the past two weeks, nearly 600 print, broadcast and online news stories referencing the National Churchill Museum and Westminster College in Fulton, MO have been generated around the world as the result of Tim Riley’s amazing discovery of the essay, which clearly reflects Churchill’s tremendous insight, scientific intellect, and the gutsy leadership he showed to even discuss the thought of aliens in outer space in 1939.

According to news monitoring services, the news articles to date have been read, heard or watched by a potential newspaper, magazine, TV, radio, and online audience of more than 6.8 billion people around the globe.

The vast interest in all things Churchill certainly proves that he is as relevant today as he was in 1939, and draws more international interest than most anyone on the planet, despite the fact he passed away more than 50 years ago.