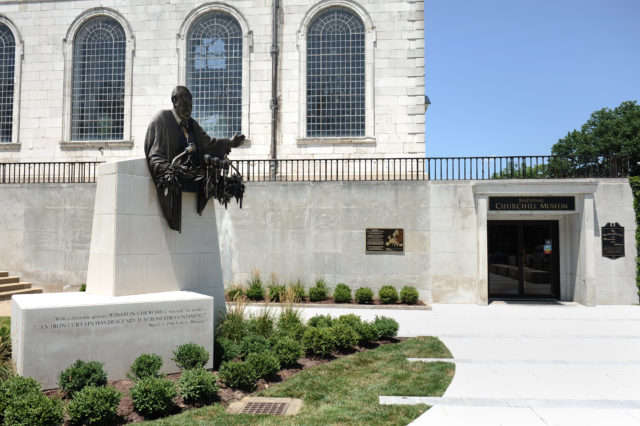 In his article 5 Old Churches You Can Visit Without a Passport for The Christian Post, regular contributor Dennis Lennox and recent visitor to campus relates how the Church of St. Mary the Virgin, Aldermanbury, was shipped stone by stone across the Atlantic Ocean to be restored on the Westminster campus.

Other churches featured in the article are St. Thomas Church in New York City; the Gothic Revival Chapel at the Hawaiian Royal Mausoleum State Monument in Honolulu; the Basilica of the National Shrine of the Assumption of the Blessed Virgin Mary in Baltimore, MD; and the Cathedral Church of St. John Divine in New York City.

The Christian Post is an American, nondenominational, Evangelical Christian newspaper based in Washington, D.C.

The article ends by posing the question most visitors to the Westminster College campus ask: “Who knew all this history lives in a small Midwestern town?”

Richard and Maria Grant are two of the people who heard about the Museum and Aldermanbury, now celebrating 50 years in Fulton.

The Pasadena, CA, couple donated an ornate scroll to America’s National Churchill Museum. Dated June 8, 1904, the calligraphy-laden scroll was issued in London to honor The Rev. Charles C. Collins, M.A., Rector of the Church of St. Mary the Virgin, Aldermanbury, on 50 years of service as the famous church’s clergyman.

The scroll bears the signatures of Church Wardens J.A.S. Lovatt and Pierson C. Carter, who followed in the footsteps of their famous predecessors, John Heminges and Henry Condell.  Heminges and Condell were friends of William Shakespeare and fellow actors who published the First Folio of the Bard’s plays.

“St. Mary the Virgin, Aldermanbury, is a venerable landmark with a rich history that is well known to the Westminster community,” said Timothy Riley, Sandra L. and Monroe E. Trout Director and Chief Curator of America’s National Churchill Museum. “As we continue to celebrate the 50th anniversary of its re-hallowing here, it is gratifying to know that our story continues to be shared and appreciated by audiences across the United States and beyond. We are particularly grateful to Richard and Maria Grant whose generosity has ensured that a treasured piece of Aldermanbury’s past is now preserved for future generations here in Fulton.”