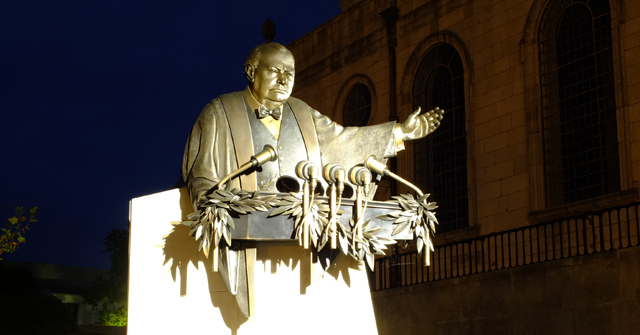 Those interested in the great 20th century statesman Sir Winston Churchill now have the opportunity to hear a little known Churchill story with enormous repercussions by watching an episode of The Travel Channel series “Mysteries of the Museum,” hosted by Don Wildman.

The show began airing in March as the opening episode of the 12th season with the National Churchill Museum segment featuring Tim Riley, Sandra L. and Monroe E. Trout Director and Chief Curator for the Museum. The Churchill segment follows a segment on the Pony Express in St. Joseph, MO.

According to the story, on Churchill’s visit to America on a lecture tour in December, 1931, a sudden and unlikely event in Churchill’s life occurred which might have changed the course of world history and jeopardized the fate of the free world.

What was this fateful event? Watch this segment on “Mysteries of the Museum” here or read about it in Churchill’s newspaper article, “My New York Misadventure,” on display in the National Churchill Museum.