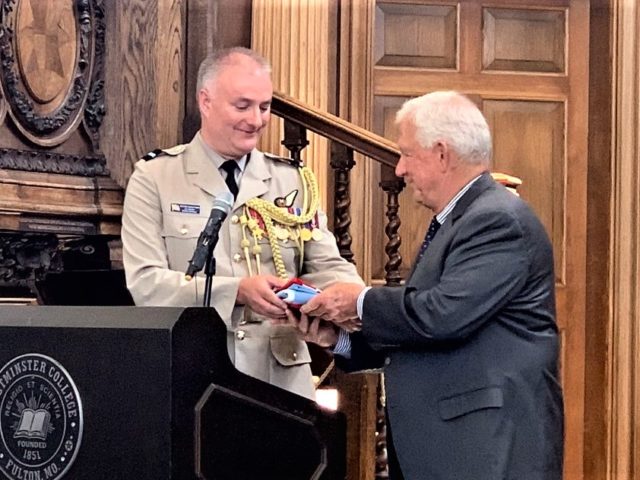 While Winston Churchill’s famous “Sinews of Peace” speech here at Westminster College 73 years ago warned that a Communist “iron curtain has descended across the continent,” his speech also promoted a “special relationship” between the United States and the British Commonwealth, an affiliation sometimes questioned in today’s geo-political environment.

The special relationship the former British Prime Minister first mentioned in his speech here March 5, 1946, was a consistent reference in speeches, poetic readings, and recognitions during solemn ceremonies held today at America’s National Churchill Museum on the campus of Westminster College.

The highlight of the ceremony, held in the Museum’s legendary 17th century Church of St. Mary the Virgin, Aldermanbury, was the presentation by Royal Air Force Commodore James Linter O.B.E. of the RAF’s Ensign, its official flag, to the Museum, the only museum in North America dedicated to commemorating the life and times of Winston S. Churchill, the 20th century’s greatest statesman.

The church, which was moved to Westminster College from Central London in the early 1960s, is the official chapel of the three Eagle Squadrons, 224 rogue American pilots who volunteered to fly for the RAF before the United States entered World War II. Nearly half were killed, missing in action, or taken as prisoners of war.

“Mr. President, I ask you to accept this Ensign for safe lodging within these walls in recognition and commemoration of the Eagle Squadrons of the Royal Air Force,” Commodore Linter, the RAF’s Air Attaché in Washington D.C., reverently requested of Westminster College President Fletcher Lamkin, Ph.D., himself a retired U.S. Army Brigadier General. “May its presence here sustain and strengthen between our nations the ‘special relationship,’ a phrase first used here by Winston Churchill in Fulton 73 years ago.”

Moments before accepting the RAF’s flag, Lamkin told guests the Church of St. Mary the Virgin, Aldermanbury, is the ideal place to display the RAF’s flag.

“This hallowed and venerable House of God — constructed in Great Britain in a time of peace, all but destroyed in London during a fiery time of war (Dec. 30, 1940), and painstakingly rebuilt here at Westminster College — is an everlasting symbol of resilience, hope, peace, and liberty,” Lamkin said.

Linter also cited how the U.S. Air Force and RAF today collaborate militarily, perform joint military exercises, have exchange programs among fighter pilots, and that the RAF currently has 450 pilots stationed across 38 states in the United States. He declared that “the ‘special relationship’ between the U.S. and Great Britain is as strong as ever.”

Prior to the formal flag presentation, guests listened to passages from Churchill speeches, poems, and a moving letter to the mother of a fallen Eagles Squadron pilot from Fulton.

General Maurice McKinney, chief of staff of the Missouri Air National Guard, read a portion of Churchill’s post-WWII speech at Westminster, in which the statesman recommended the formation of an international air force to defend democracy and liberty around the world.

In essence, Churchill proposed the formation of what is today’s NATO, the North Atlantic Treaty Organization, McKinney said.

Boeing executive Randall Gelzer, senior director of state and local government operations, also read from Churchill’s August 20, 1940, speech before Britain’s House of Commons, where the then-new Prime Minister credited the Royal Air Force, which also included the American Eagle Squadrons, with helping to save London against the deadly bombing raids by the German Luftwaffe.

“The gratitude of every home in our island, in our empire, and indeed throughout the world, except in the abodes of the guilty, goes out to the British airmen who, undaunted by odds, unwearied in their constant challenge and mortal danger, are turning the tide of the World War by their prowess and by their devotion,” Churchill said. “Never in the field of human conflict was so much owed by so many to so few.”

Lt. John F. “Pappy” Lutz, a Fulton, MO, resident and former Westminster College student, who was among the young Americans who volunteered in 1941 to fight for the RAF as a member of the Eagle Squadrons, also was remembered by Lt. General Richard Harding, retired Judge Advocate General of the U.S. Air Force.

He read a moving letter to Lutz’s mother by close friend, Eagle Squadron Airman Howard D. Hively, of Columbus, OH, who reported Lutz’s death in a dog fight over the English Channel on May 4, 1943. After providing a brief overview of the action in which Lutz’s plane was disabled in the air attack, Hively said Lutz radioed to the squadron that he was bailing out at 2,000 feet above the Channel.

“It’s a damn shame, but I’m going to get my new boots wet,” Hively quoted Lutz as saying moments before he ejected from his plane. Unfortunately, Lutz’s parachute only partially opened. Neither his body nor his plane were ever found. Hively closed the letter by writing the following:

“Though you have lost your son, M’am, it may help to know that he went as any man would be proud to go, doing his duty protecting an ideal he loved and with a joke on his lips.”

Her Majesty’s Honorary Consul of Great Britain and Northern Ireland to Missouri, the Honorable Mark Sutherland, of St. Louis, also read a moving sonnet — High Flight — by John Gillespie Magee, Jr., an American fighter pilot with the Royal Canadian Air Force in the early stage of WWII. His sonnet was about the joy and freedom of flying his Spitfire aircraft high above the Earth.

“Oh, I have slipped the surly bonds of earth, and danced the skies on laughter-silvered wings,” Sutherland read, ending with the sonnet’s closing lines, “Up, up the long delirious burning blue, I’ve topped the wind-swept heights with easy grace, where never lark, or even eagle flew, and while with silent, lifting mind I’ve trod the high untrespassed sanctity of space, put out my hand and touched the face of God.”

Magee was killed in action on Dec. 11, 1941, during a training flight in England.

NOTE: An archived stream of the ceremony is available here.