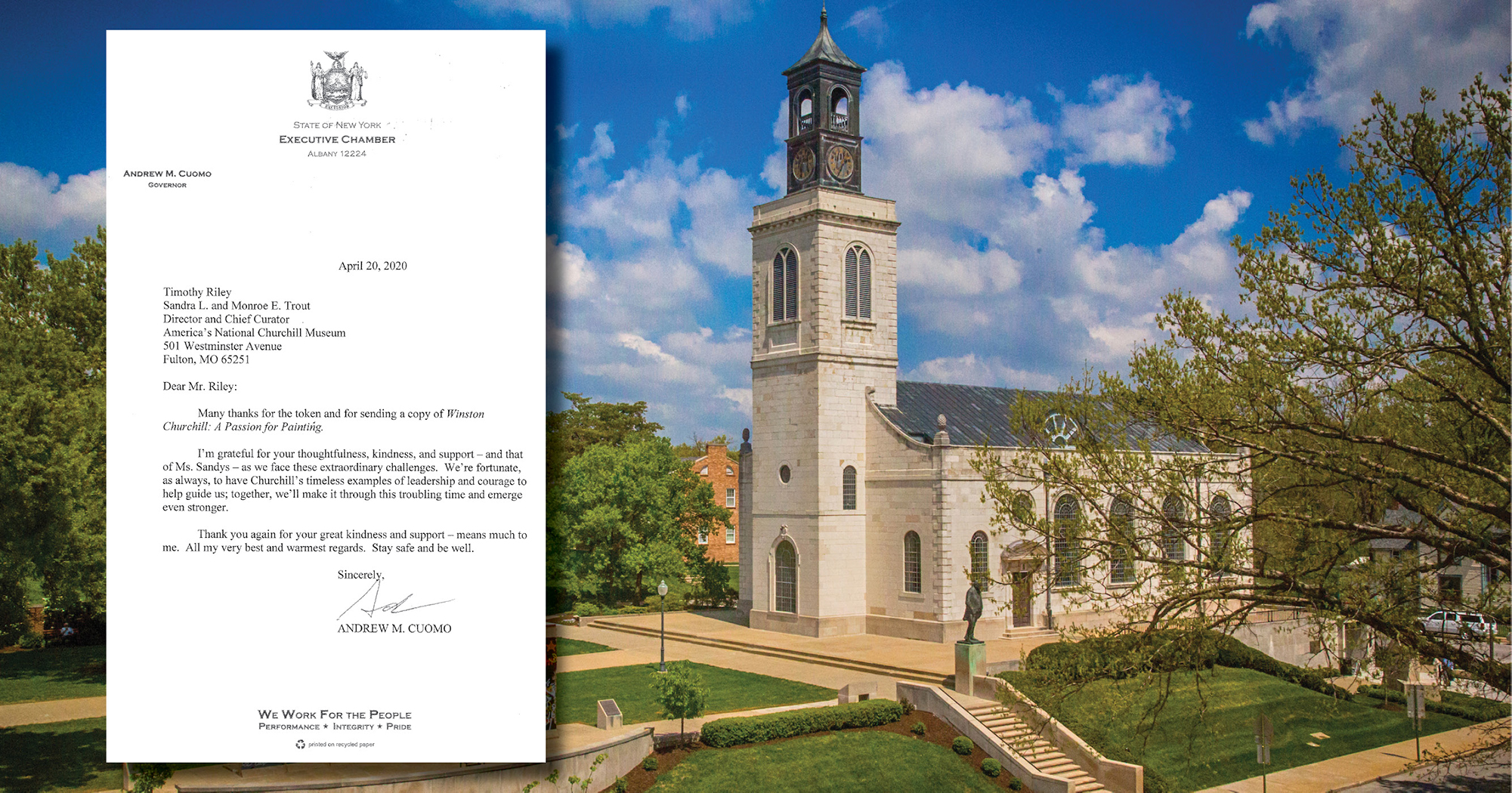 America’s National Churchill Museum (ANCM) on the Westminster College campus wrapped up a month brimming with activity and recognition despite its temporary closure for the COVID-19 pandemic. On April 23, ANCM received a surprise thank-you letter from New York Gov. Andrew Cuomo and conducted the third in a series of Churchill This Day live webcasts.

The two sent a package with a signed copy of Sandys’ book Winston Churchill: A Passion for Painting. Riley included a desk-sized bust of Churchill with a note that encouraged Cuomo with Churchill’s wartime advice to “K.B.O.”: “Keep Buggering On.” 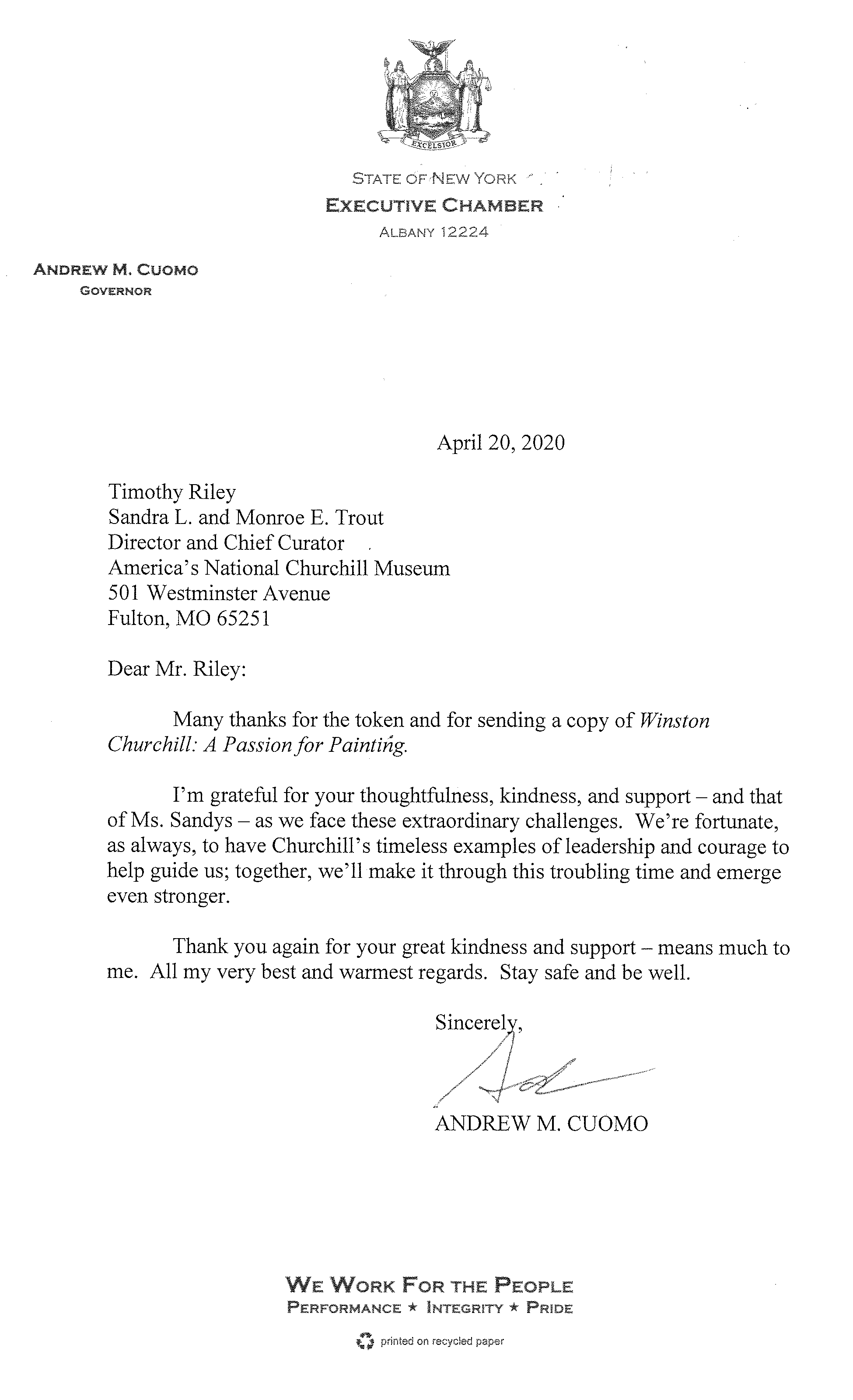 New York Gov. Andrew Cuomo sent the above letter as a thank-you for gifts received from ANCM and Edwina Sandys, Winston Churchill’s granddaughter. The two sent a similar package last week to Missouri Gov. Mike Parson, who served as honorary co-chair of the Museum’s 50th Anniversary celebration last year and continues to be supportive of ANCM.

Churchill This Day at Chartwell and America’s National Churchill Museum 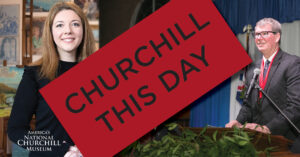 Carter, Project Curator and Collections Manager, oversees the wide variety of collections at Chartwell, which today is a National Trust Museum.

The two curators were able to share with viewers rare glimpses into their respective museums. The webcast followed the themes “The Good,” “The Bad,” “The Ugly,” “The Underdog” and “The Favorite/Favourite.”

The webcast ended with “The Favorite,” which included Chartwell’s painting Some Statesmen of the Great War by Sir James Guthrie and a hand-edited draft with notes of Churchill’s “Sinews of Peace” speech that he delivered at the College in 1946.

Riley says that Chartwell and ANCM are united in their efforts to share their collections to a broader audience.

“Chartwell and America’s National Churchill Museum are kindred institutions,” Riley explains. ”Though we are located on opposite sides of the Atlantic, we face the same challenge: how to keep the lessons of history, leadership and that most Churchillian of attributes — steadfastness in the face of adversity — at the forefront in these difficult days … sharing our collections with a worldwide audience delivers those lessons in a way that is in equal parts fascinating and fun.”

Last week’s webcast rounded out a series of similar events that have taken place virtually despite the worldwide pandemic.

Previous Churchill This Day live webcasts included Churchill biographer Andrew Roberts and Gen. (RET.) David Petraeus on “Leadership in Times of Crisis.” Also included in the webcast lineup was a conversation with Churchill Fellow Allen Packwood OBE, director of the Churchill Archives Centre at Churchill College at the University of Cambridge in England, and retired MSNBC correspondent Chris Matthews. The two spoke the previous week on “Churchill, President Kennedy and Leadership Today.”

All Churchill This Day webcasts can be found on ANCM’s YouTube page here.

During this time of crisis, Riley says that many are turning to Churchill’s inspiring words. He explains that engagement with ANCM’s website and social media have increased markedly during the pandemic. Riley also says he receives a number of requests per week for verification of Churchill’s words during various times of crisis.

In cooperation with the International Churchill Society, ANCM has launched a worldwide competition asking individuals of any age to find their own words of inspiration. 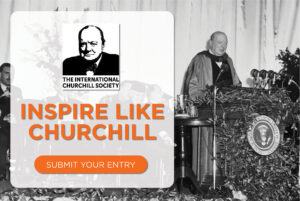 The Society asks for written entries of no more than 300 words or videos that are no longer than 60 seconds in length. Submissions will be judged by an international panel that includes Churchill Fellows Randolph Churchill, great-grandson of Churchill; Celia Sandys, granddaughter of Churchill; and renowned historians and authors Sir David Cannadine; Erik Larson; Candice Millard; and Andrew Roberts.

The winner will earn $10,000 for a frontline health organization, hospice, hospital or medical-related non-profit of his or her choosing. In addition, the first-prize winner and a guest will be entitled to a trip to an International Churchill Society event in New York or London when travel is deemed appropriate.

The deadline for submissions is May 30. To submit an entry, go here.

Despite the current challenges of the COVID-19 pandemic, Riley says the Museum continues to lead, like Churchill, in a way that provides confidence, hope and inspiration.

Riley reflects, “Though our doors are closed, we remain open to the lessons of the past, and through the combined efforts of Museum members, staff, Fellows and volunteers, we will overcome the present challenge and look forward to brighter days ahead.”