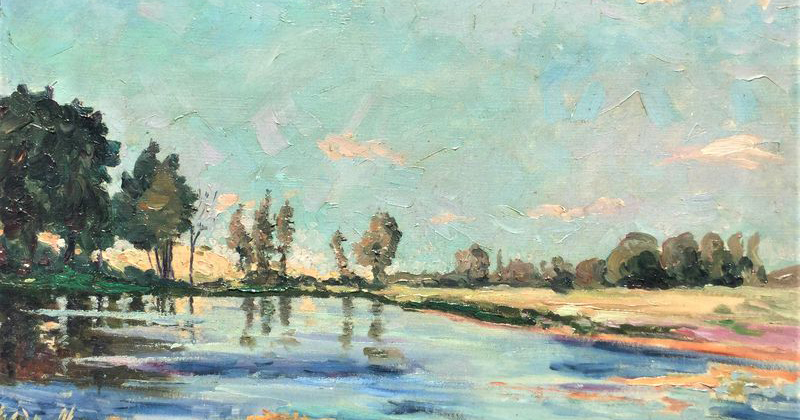 Winston Churchill’s Lake Scene at Norfolk, painted in 1935, Copyright Churchill Heritage Ltd., is one of the works of art currently displayed at the Paul and LuLu University Art Museum at the University of Louisiana-Lafayette. The artwork is on loan from America’s National Churchill Museum through March 21.

Winston Churchill’s paintings, sculptures and other works from America’s National Churchill Museum (ANCM) caught the attention of Smithsonian Magazine on Feb. 3. The Art of Sir Winston Churchill, an exhibition organized by ANCM and currently on view at the Paul and LuLu University Art Museum at the University of Louisiana-Lafayette, continues to make headlines and attract record crowds.

The sampling of the statesman’s artwork remains on view in Lafayette through March 21. Read more about the exhibit here.

While known by many on the Westminster campus, the colorful and accomplished canvases, or “daubs” as Churchill called them, are described in the Smithsonian as Churchill’s “little-known art.”

Timothy Riley, Sandra L. and Monroe E. Trout Director and Chief Curator of ANCM, is quoted in the article, pointing out that Churchill’s paintings often take people by surprise. Riley says Churchill is known mostly as “a statesman, a leader, a military commander, a soldier,” but the Louisiana exhibition explores Churchill’s creativity — something that suited him as a painter and as a prime minister.

“Like everything he did, he pursued painting with audacity and gusto,” Riley explains to Westminster Today. “Churchill’s ability to envision and shape world events is nearly unmatched, and it really does not come as a surprise to see him apply the same power of observation and vision to his canvases. It is wonderful to see so many making that connection.”