An MTV Chief, a General, and President Are Among the New Churchill Fellows 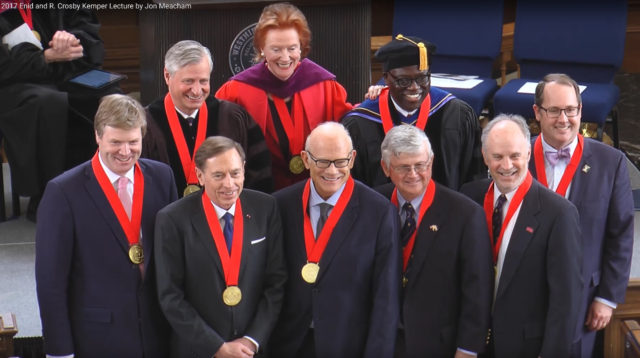 Along with other inductees, they became members of the prestigious association during a solemn ceremony over the weekend in the Church of St. Mary the Virgin, Aldermanbury, which also serves as the home of the National Churchill Museum. Acting as Senior  Fellow, Winston Churchill’s granddaughter, noted artist and sculptor Edwina Sandys, M.B.E. bestowed the honor on the new inductees.  They are:

The Association of Churchill Fellows is an honorary society of people dedicated to the development and use of the National Churchill Museum at Westminster, where, in 1946, Sir Winston Churchill was given an honorary degree and delivered his historic “Iron Curtain” speech.

Since 1969 when the Association was started, 300 individuals who have demonstrated support and service to the Museum have been recognized as “Fellows.”

This year, for the first time, the International Churchill Society Board of Trustees also met at Westminster over the weekend.