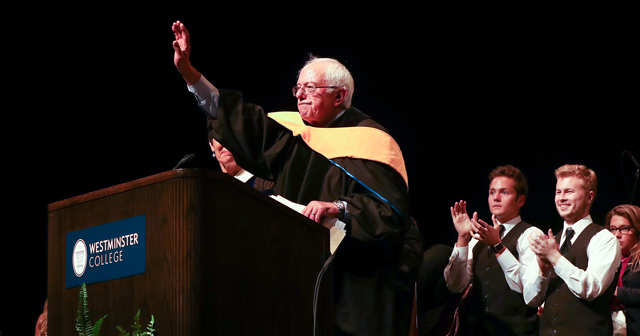 The unintended consequences of regime change and American military power have had a disastrous effect on America’s reputation around the globe, and is causing people to lose faith in democracy, U.S. Sen. Bernie Sanders, I-VT, told a packed Champ auditorium on Thursday.

“Far too often, American intervention and the use of American military power has produced unintended consequences, which have caused incalculable harm,” Sanders told an enthusiastic audience of more than 1,300 students, faculty, staff, alums and guests. “Yes, it is reasonably easy to engineer the overthrow of a government. It is far harder, however, to know the long-term impact that action will have.”

Sanders made his comments while delivering the 58th John Findley Green Foundation Lecture inside Champ Auditorium. Video screens and loud speakers also were set up for an overflow audience inside the Church of St. Mary the Virgin, Aldermanbury and on Latshaw Plaza. A group of Westminster students also sat on stage for a prime view of Sanders’ lecture.

It began with a processional led by Gretchen Huedepohl, invocation by Chaplain Rev. Jamie Haskins, the singing of “America” by The Churchill Singers, and welcoming remarks by Dr. Mark Boulton, associate professor of history and chair of the 2017 Hancock Symposium.

The entirety of Sanders’ lecture can be viewed over the Westminster YouTube channel. It was live-streamed to thousands of viewers around the globe through Westminster’s YouTube Channel and through the YouTube channels of various news aggregators. Locally, KRCG-TV also broadcasted Sanders’ speech “live” to its Mid-Missouri television audience.

Sanders’ foreign policy speech, which was covered by national, regional, and local media, was a substantial departure from his 2016 Presidential campaign, in which he typically focused on domestic affairs, such as healthcare, tax reform, and education.

The goal of Sanders’ speech was to lay out a progressive vision for foreign policy that focuses on international collaboration, humanitarian concerns and the promotion of democracy. The key, he said, must be building partnerships, not just between governments, but between people.

Sanders also said that “far too often, the use of American military power has resulted in incalculable harm,” pointing specifically at the war in Iraq. America must not recede from the world stage, he explained, but “it must rethink its priorities.”

“The goal is not for the United States to dominate the world. Nor is our goal to withdraw from the international community and shirk our responsibilities under the banner of ‘America first.’ Our goal should be global engagement based on partnership rather than dominance,” he said.

Sanders also pointed out that the nation supported “murderous regimes” around the world during the decades of the 50s, 60s, 70s, and 80s, and those actions continue to make the nation less safe. He cited, for example, the Iraq War, which Sanders said was a huge mistake, and America’s military engagement there inadvertently helped create Islamic State and other terror groups that continue to threaten America, Europe, and the Mideast.

In closing, Sanders said the U.S. must live its democratic values, not just talk about them or force them upon other countries.

“If we’re going to expound the virtues of freedom and democracy abroad, we need to practice those values here at home,” Sanders said.

Sanders said he was well-aware that his foreign policy speech carried with it some historic symbolism. It is the same platform in which Winston Churchill delivered his famous “Iron Curtain Speech” in 1946. Besides Churchill, others who have delivered the Green Foundation Lecture, which was established in 1936, have included Harry Truman, J.C. Penney, Ronald Reagan, Margaret Thatcher, George H.W. Bush, Gerald Ford and Poland’s Lech Walesa.