On the Passing of Lady Soames 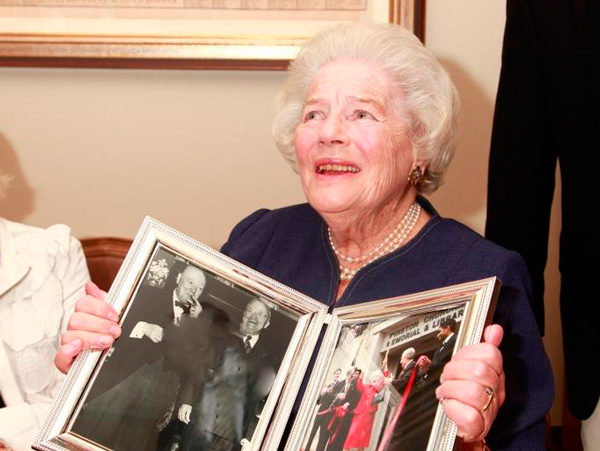 The Westminster College community joins the world in offering condolences to the members of the Churchill family at the passing of Lady Soames, daughter of Winston Churchill. Her strong support for the National Churchill Museum on our campus has helped make it the national treasure it is today.

No one who attended the Westminster commemoration of the 60th anniversary of Sir Winston Churchill’s historic visit in 2006 will ever forget her exuberant reaction as she triumphantly lifted the ceremonial scissors in the air after cutting the ribbon on the newly renovated Museum. Nor will they forget the wisdom, wit, and grace of this magnificent woman as she sat on the auditorium stage that weekend to be interviewed before the entire campus community.

Those who took the Museum’s Churchill England trip in 2011 were also privileged to spend some time with Lady Soames and have many wonderful memories.  Her long, rich life and the joy she found in it are an inspiration to us all.

Jane and I and the entire Westminster community are deeply saddened.

On behalf of Chairman Wallace L. Head and the Westminster Board of Trustees and Senior Fellow Jean-Paul Montupet and the Board of Governors of the Association of Churchill Fellows, we send our condolences to the Churchill family.  They are in our thoughts and prayers at this difficult time.

Above,  Lady Soames, Churchill’s daughter, holds a commemorative photo album of her appearance at the 60th anniversary celebration and opening of the renovated National Churchill Museum.  The album was presented to Lady Soames by a Westminster College delegation on tour during the Museum’s 2011 Churchill England trip.