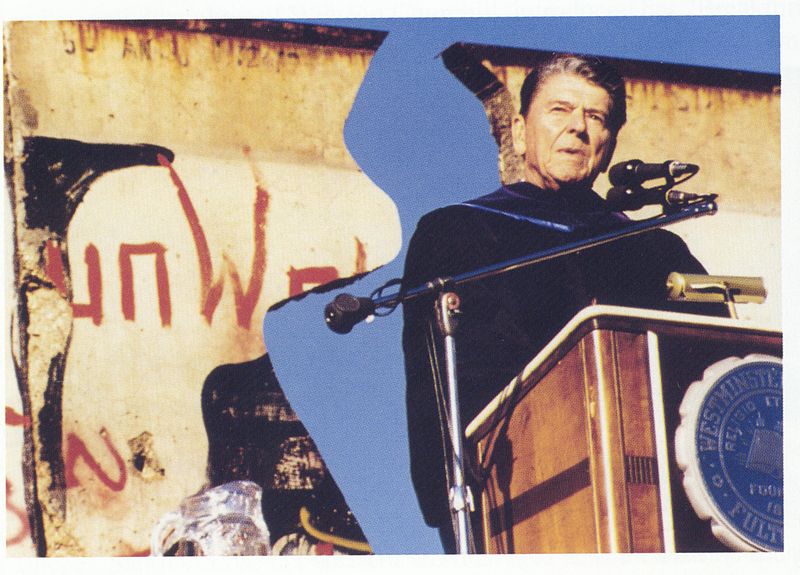 Feature photo above, President Ronald Reagan speaks at the dedication of the “Breakthrough” sculpture (made from sections of the Berlin Wall by Churchill’s granddaughter Edwina Sandys) at Westminster College, Nov. 9, 1990.

Former Reagan speechwriter Mark Klugmann will speak with Westminster College students via Skype from 4:00-5:00 p.m., Thursday, Nov. 13, in Room 311 of the Hazel Annex of Reeves Memorial Library on the campus of Westminster College.

Klugmann will be speaking with the students from Tegucigalpa, Honduras, where he lives and works on the topics of the end of the Cold War and the fall of the Berlin Wall.  A question and answer session will follow.

The session will be moderated by Dr. Kurt Jefferson, Assistant Dean for Global Initiatives, Director of the Churchill Institute for Global Engagement and Professor of Transnational and International Studies.

Klugmann served as speechwriter to Presidents Ronald Reagan and George H.W. Bush and as Assistant Director of the White House Outreach Working Group on Central America. Outside of the United States, he has advised seven Latin American Presidents and helped governments to design and win approval of multiple financial, regulatory and infrastructure reforms.

Klugmann has lectured on public policy in over 30 countries and at numerous institutions such as the World Bank and the Kennedy School of Government at Harvard University. He has appeared in the New York Times, Wall Street Journal and Time magazine among many others.

The Churchill Institute for Global Engagement and the National Churchill Museum are hosting this capstone event in conjunction with Westminster College’s weeklong celebration of the 25th anniversary of the fall of the Berlin Wall.