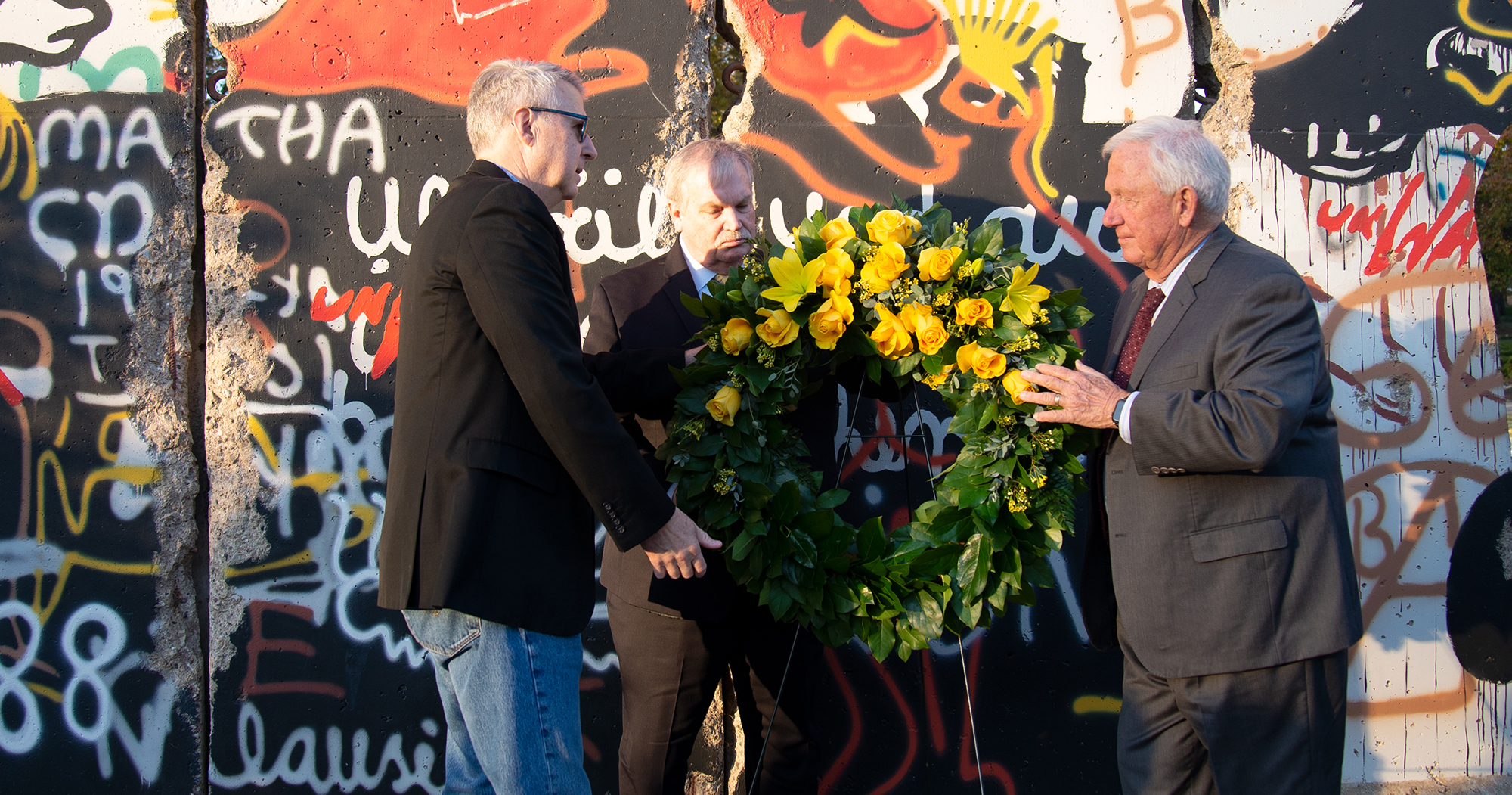 Peter Robinson, left, Board of Trustees Member Brock Ayers and President Fletch Lamkin placed a wreath in front of Breakthrough during a solemn ceremony on Nov. 7.

Robinson, President Fletch Lamkin and Board of Trustees member Brock Ayers, ‘82 ΔΤΔ, placed a yellow floral wreath in front of the Breakthrough sculpture at 4:15 p.m. on Nov. 7.

The ceremony solemnly commemorated lives lost in attempts to flee to the western side of the Berlin Wall between 1961 and 1989. The bells of the Church of St. Mary the Virgin, Aldermanbury, rang 30 times to mark the 30-year anniversary of the dedication of Breakthrough at Westminster by former President Ronald Reagan on Nov. 9, 1990.

Created by artist Edwina Sandys, granddaughter of Winston S. and Clementine Churchill, Breakthrough is a 32-foot-long sculpture created out of graffiti-covered sections of the Berlin Wall. The sculpture is located adjacent to the church and America’s National Churchill Museum, or ANCM.

The church, originally designed in London, England, by Sir Christopher Wren in the 17th century, was shipped stone by stone to Fulton, MO, as a memorial to Churchill’s “Iron Curtain” speech. Churchill’s world-famous address — delivered in the Historic Gymnasium on March 5, 1946 — foretold of the impending Cold War.

A White House speechwriter for six years who penned more than 300 speeches, Robinson is most known for his “Tear Down This Wall” speech. He spoke about the process of writing that particular address at 4:30 p.m. in the church.

Today Robinson is a Murdoch Distinguished Policy Fellow with the Hoover Institution. He is the author of a number of books, including How Ronald Reagan Changed My Life, and is frequently published in a variety of publications, including the New York Times, Forbes ASAP and The Wall Street Journal.

Other events on campus that commemorated the 30th anniversary of Breakthrough included the viewing of a documentary on the Berlin Wall and panel discussions on the Cold War, which took place in Hermann Lounge in Hunter Activity Center.