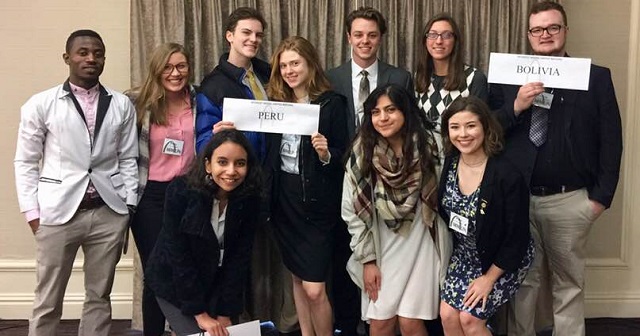 The Westminster Model UN team continued its award-winning streak at the 58th Annual Midwest Model United Nations Conference in St. Louis, February 21-24. Ten Westminster students went to this year’s conference and represented Peru in the General Assembly and the Economic & Social Council, and Bolivia in the Security Council.

Dr. Kali Wright-Smith, Professor of Political Science, serves as Model UN instructor and advisor. The Westminster Model UN team was founded in 1981 by Dr. Linda Pickle, a former professor of German at the College. The program is housed in the Churchill Institute for Global Engagement.

“I am always exceedingly proud of my students’ work at MMUN,” says Dr. Kali Wright-Smith. “They represent their countries with passion and tenacity and never fail to impress other delegations with their research and contributions to meaningful diplomatic resolutions.”

The MMUN was founded in 1962 and is the oldest Model UN conference simulation in the United States. Westminster College has sent students to different Model UN conferences over the years, and its program is considered a model for other institutions.

“I was particularly proud of this group, which included 7 students who were new to the Model UN program,” says Wright-Smith. “They dove in with enthusiasm, prepared efficiently, and could have passed for veterans. They represented Westminster with professionalism and respect.”

The full list of students who represented Westminster at MMUN is below.