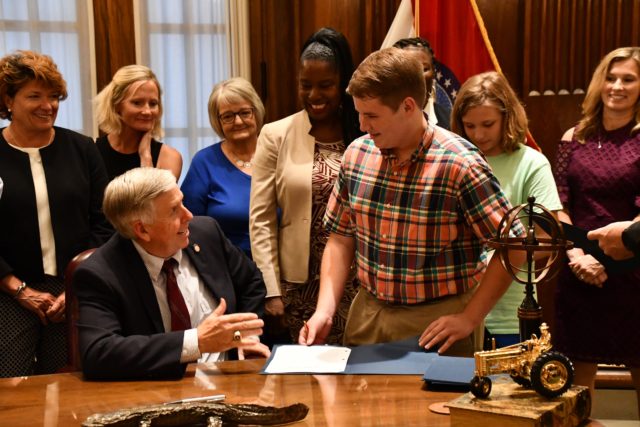 When Cameron Gehlert ‘22 from Linn, MO, went to visit his state representative at the time, Justin Alferman, in October 2017, with an idea for legislation, he probably never envisioned that two years later he would be standing beside Missouri Governor Mike Parson, watching his bill be signed into law.

Cameron had just finished an interview for the U.S. Senate Youth Program, an educational program which sends two student leaders from each state to Washington, D.C., to experience government in action.  (Side note: He was selected for the program.)

Since he was already in Jefferson City up the street at the Missouri Department of Education, he decided he would go to the State Capitol to visit with Rep. Alferman.

For quite some time, Cameron had been interested in the hellbender salamander, also known as the “snot otter,” which at two feet in length is one of the largest species of salamanders in the world.  Missouri is the only state which is home to both subspecies of the amphibian, the eastern hellbender and the Ozark hellbender.

“My heart has always gone out to the ‘snot otter,’” Cameron said. “It is so chubby, and it is just so ugly that I find it cute. But not a lot of people know it is endangered.”

Hellbenders have natural camouflage with their brown skin with black splotches, and their slippery, flattened bodies with well-developed legs and oar-appearing tails make it easy for them to walk on the bottom of stream beds, their natural habitat.

Although these lizards can live up to 30 years, since the 1970s their population has dropped as much as 90 percent because their bodies are sensitive to water quality issues, and so many humans have altered and polluted their habitat.

In fact, the St. Louis Zoo has a breeding program to try to save the hellbender from extinction and is trying to determine what factors are causing such a rapid decline in the hellbender’s population.

“I felt the hellbender should be promoted so more people would become aware of its plight, and making it a state symbol would be an amazing way to solidify the hellbender into Missouri’s culture and heritage,” Cameron said. “So with Rep. Alferman’s guidance, we came up with the bill title, “Official State Endangered Species.”

Although Rep. Alferman and Cameron got a draft of the bill filed last year, the measure was one of the many casualties of an acrimonious legislative session.

This year State Representative Jeff Justus introduced the bill as HB 407, and Senator Karla May introduced a companion bill in the Senate so the idea would be moving through the process in both chambers.

The House bill passed and was combined with Senator May’s bill, SB 210, which was inspired by a St. Louis elementary school class who wanted to designate the pawpaw the official state fruit tree. The bill then went back to the House of Representatives where some more amendments were attached and came back to the Senate to pass with a super-majority.

Cameron is majoring in environmental studies, political science, and transnational studies. Currently, he is finishing a summer internship with a watershed protection program at the Missouri Department of Natural Resources. 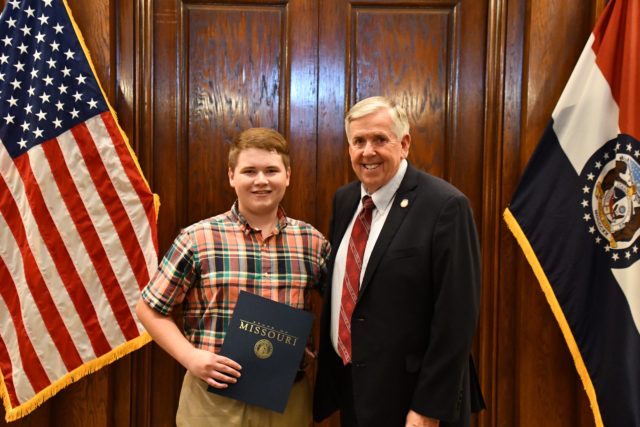