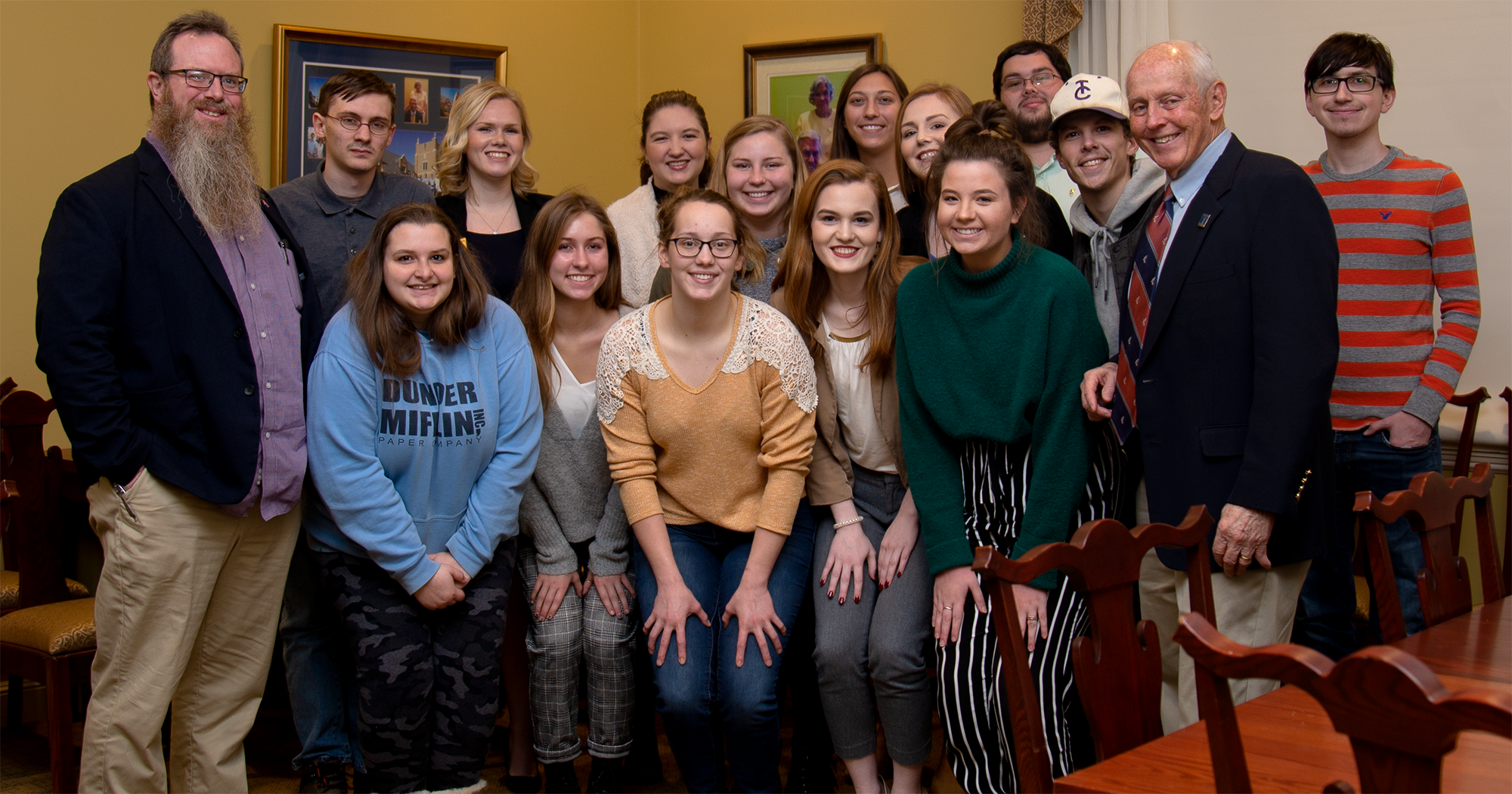 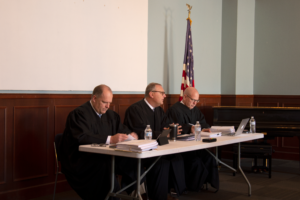 Chapman and Pfeiffer happen to be two of 11 judges who make up the Western District of the Missouri Court of Appeals — odds that reflect the Westminster’s strong tradition of students who achieve successful legal careers after graduating from the College. The special session is one of a variety of activities the WBA will conduct in the future to support Westminster pre-law students.

“A number of factors help prepare Westminster students for law school,” Langton explains. “They are taught to write well and quickly, our exams primarily are made up of essay questions, similar to what students encounter in law school, we have a strong international pre-law honor society and we offer a number of strong pre-law classes.”

I really enjoyed being able to sit with the attorneys at the luncheon. I was able to ask about their paths during and after law school, and it was interesting to hear the different stories each had to share. – Maggie Adair, ’20 ΑΓΔ

One of those courses is American Jurisprudence, which happens to be taught by Pfeiffer, who is a WBA founder. Other WBA founders present at the event included Chapman, Langton and fellow pre-law advisor Dr. Tobias Gibson. Gibson is the Dr. John Langton Professor of Legal Studies and Political Science. His areas of specialty include security studies, constitutional law/politics and the Supreme Court.

With more than 100 members, the WBA shows strong initial representation from Westminster’s nearly 500 law school graduates from about 40 law schools throughout the world.

Alumni and WBA members Dean Cooper, ’86 ΚΑ, of Jefferson City, MO; Thomas Dunlap, ‘71 ΣΑΕ, of Columbia, MO; and Tim Harlan, ‘71 ΣΑΕ, of Columbia, MO, joined the judges, pre-law professors and a sizeable group of students for a special luncheon in the Marsh Jones room in Mueller Leadership Center following the session. The luncheon was graciously funded by Jim Bennett, ’92 ΒθΠ. 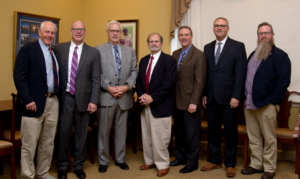 At the luncheon, Cooper sat with a small group of students and explained that although his degree in computer science was not a traditional pre-law major, he was generally well-prepared for law school.

Cooper added that Westminster’s liberal arts basis prepared him for law school and that, more specifically, he felt prepared after taking a class similar to the course Pfeiffer teaches at Westminster.

“That course, taught by a judge, was particularly strong preparation for law school,” Cooper said firmly. 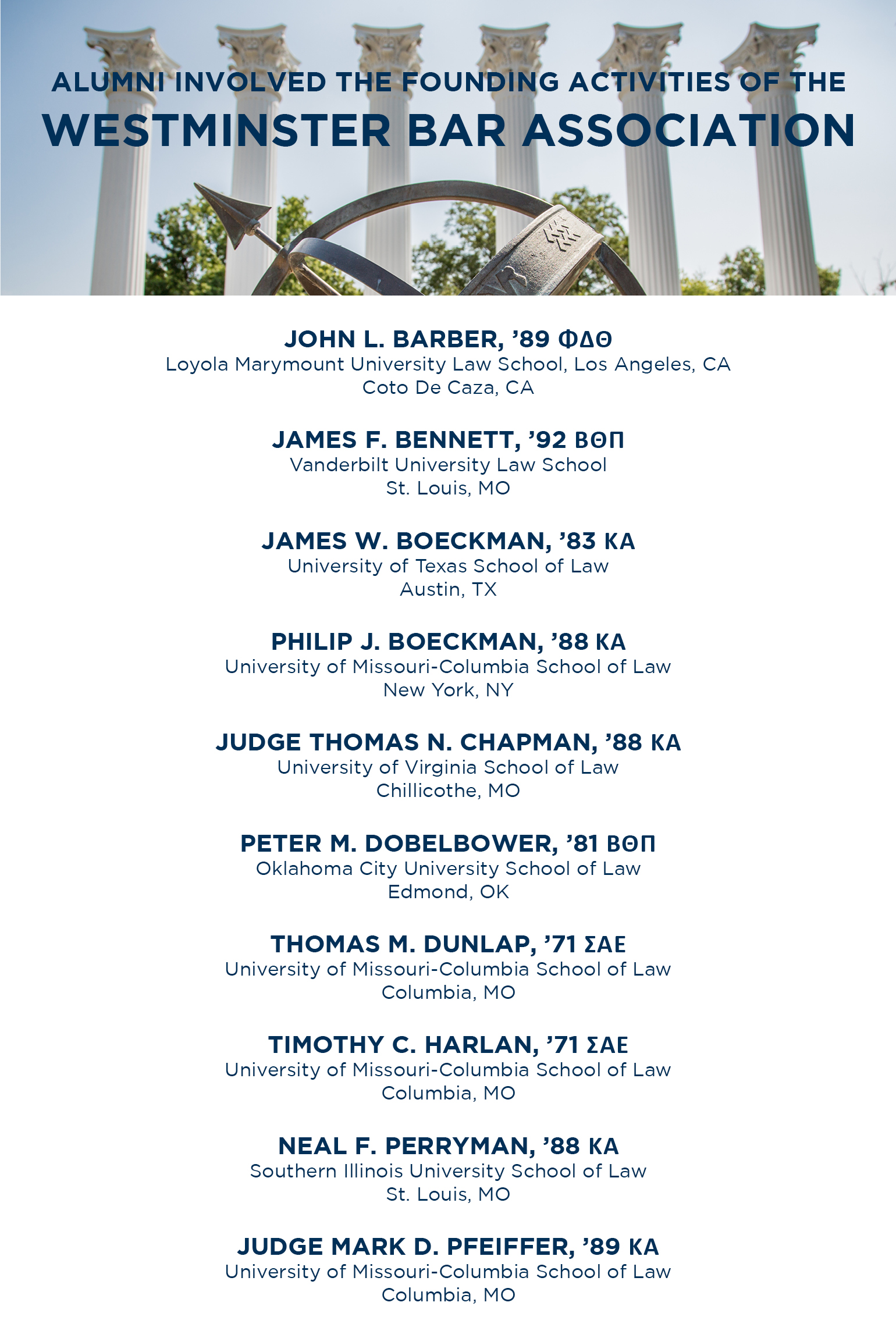