To Go Greek or Not to Go Greek: Ethan Deimeke Shares His Story 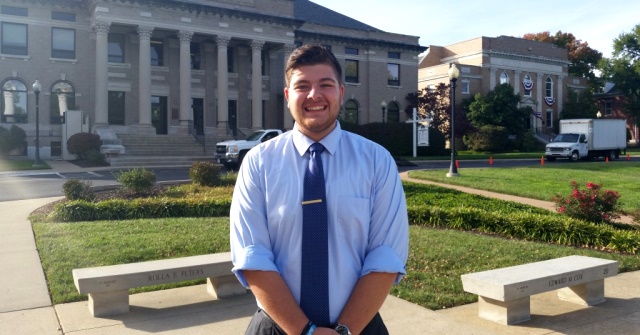 Deciding whether to go through Men’s Greek Recruitment can be hard for a freshman, especially if he isn’t attracted to the fraternity stereotypes depicted on TV and in movies. Skeptical of fraternity life, Ethan Deimeke ’20 didn’t plan on going through recruitment as a freshman. When he did, the experience surprised him.

I came to Westminster with the firm belief I wanted to refrain from joining a Greek organization. Outside of the society itself, there is a succinct lack of knowledge about what exactly joining a fraternity entails, outside of negative coverage by media. I had only been exposed to the ideas of fraternities that participate in questionable behavior and I was extremely skeptical of the Greek experience.

As I mentioned, the only aspects of fraternity life I knew was what I been shown and taught through other people’s experiences, and I had no firsthand knowledge of the true meaning of a fraternity. I assumed that all fraternities were simply excuses to drink and have parties, which I wasn’t exactly keen on participating in.

What made you decide to go through recruitment in the end?

I was highly encouraged by many family members and friends, as well as individuals at Westminster, to take part in recruitment, for the simple fact it is an excellent way to connect with new people, especially upperclassmen. I intended to go through recruitment, make some connections, and be done with the process.

Initially, I didn’t care really at all. I was not invested in it, and I had no plans to join a Greek organization. After the first night, however, I quickly realized there was a much deeper level to fraternity life than just superficial stereotypes. After that, I allowed myself to enjoy recruitment, and it was a very unique and exciting experience.

Can you walk me through recruitment?

The first night myself and my fellow prospective pledges were split into five groups, and the first night we each visited two different fraternities. We had an hour at each house to tour the facilities, chat with active members about the fraternity and its values, and get to know our potential brothers. The first night was the calmest, but the stress that comes with decision-making was right around the corner.

The second night we reformed into our groups, and each group visited the remaining three fraternities that they had not yet been exposed to. After we all had finished our conversations and tours, the groups immediately headed to Coulter Science Center to vote. The vote in question was to rank our individual choices from one to five, with one being the fraternity we most wanted to potentially invite us back to the house for extended conversations with the active members.  I experienced a rush of uncertainty, unknowing which house was right for me, but I voted regardless. That capped the second night, and the tension only increased.

On the third and final evening of recruitment, we were notified whether we were invited back to the houses or not, and I was fortunate enough to receive three invitations, so my night was a rather hectic one. I revisited three of the houses I was interested in, and slowly but surely I narrowed down my decision. After everyone returned from their invites, we headed off to vote yet again, but this time it was for bids. This time it was to rank which houses would you most like to receive a bid from. I answered, more confident but still not completely sure as to which fraternity would best suit me.

The next day, we received our bids. I was given two choices, and I thought carefully over my options. I was in a state of uncertainty, but in a moment of clarity I felt I knew which house was my house. I selected a bid from Phi Delta Theta, and that evening knew I absolutely made the correct decision when I ran to the house with my future brothers and was greeted by equally as excited active members, all bearing grins, handshakes, hugs, and pats on the back.

My favorite part of recruitment was the excitement, not only from myself and the other potential pledges, but from the fraternities as well. It was palpable, and created a sense of festivity around the events. Additionally, all the fraternities I visited were incredibly welcoming, and it was comforting to know that the houses I was choosing from all truly wanted to get to know us, and that all the Greek organizations on campus are respectable and sound institutions.

I decided to join a fraternity because it was made clear to me that Greek life is an experience that defied explanation. The perceptions of fraternities seen on television and in the media are false, at least where Westminster is concerned. The fraternities on this campus are so much more than an excuse to have a good time. They are avenues for success, brotherhood, and lifelong bonding, and assist you to develop your own ideals, morals, and goals, while also giving you the shared experience of a group of men coming together to reach for a central purpose.

Do you like being in a fraternity now? Why?

Absolutely. I have spending a lot of time at the house with my future brothers, and have not regretted a single moment of it. I am already beginning to form relationships with my pledge class that I know will last throughout my life.

What do you look forward to as a fraternity member now?

I am looking forward to becoming a full active member, as well as moving into the house. Beyond that, my anticipation knows no bounds, and I am excited for my own future as well as my fraternity’s!