The Honorable James E. Baker Discusses the Cold War, Humility and the Law 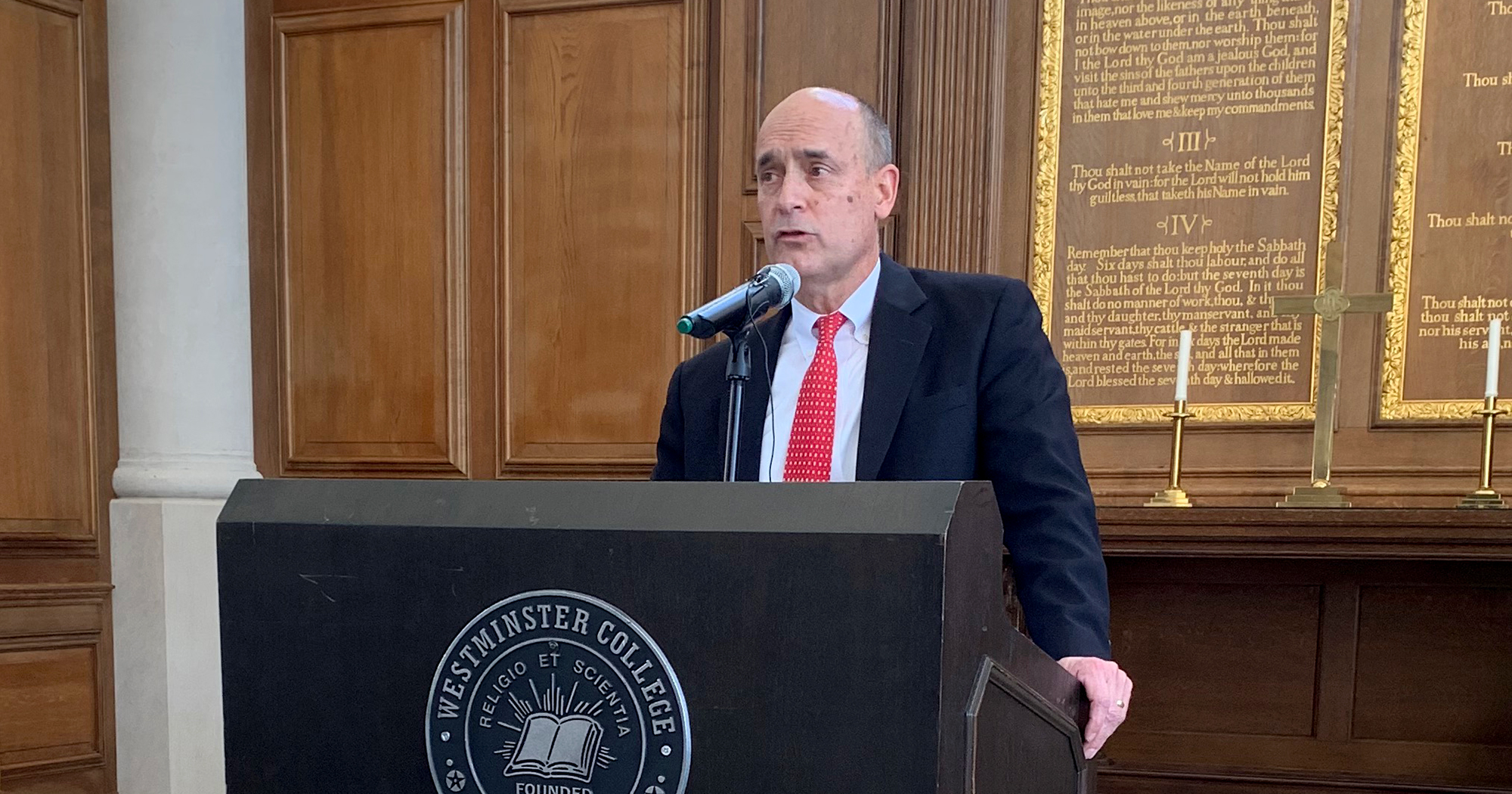 The Honorable James E. Baker, Director of the Institute for National Security and Counterterrorism at Syracuse University in Syracuse, NY, began his address at Westminster yesterday by emphasizing the humility of former President Harry S. Truman.

The essential link between Westminster and Winston Churchill, Truman officially invited Churchill to speak at the College and introduced the former prime minister before Churchill’s world-famous “Iron Curtain” speech on March 5, 1946.

“I don’t think of humility when I think of presidents,” Baker said. “But think about it. What president of the United States would travel from Washington, D.C., to Fulton, MO, to introduce another head of state? That’s not in the presidential playbook. That’s an act of humility and grace on behalf of a wonderful president.”

Baker spoke further about humility and honesty in politics and the legal profession before a crowd of more than 80 people at 11 a.m. in the Church of St. Mary the Virgin, Aldermanbury.

A leading authority on national security, Baker worked for the U.S. Department of State, the Foreign Intelligence Advisory Board and the National Security Council prior to his appointment at Syracuse University.

Baker’s talk titled “Deeds of Freedom: Lessons from the Cold War in a Time of Turmoil” directly addressed students who may pursue a law degree after graduating from Westminster. He emphasized the need to reform law schools so that both authority and values are sought.

Baker said that the law depends on a moral intention and the people who wield that intention.

A former infantry officer in the U.S. Marine Corps who later joined the staff of Sen. Daniel Patrick Moynihan, Baker’s presentation also included an assessment of what he referred to as the “a divisive time” in which we live. “Less so in Syracuse, New York, and perhaps Fulton, Missouri, than in Washington, D.C., but divisive nonetheless,” he said.

Baker’s talk emphasized that many public officials today seem “more committed to power and to party than they do to principle and to patriotism.”

Looking directly at his audience, Baker said, “I’m telling you, you can always get another job. But you can never reclaim your self-respect once you give it away.”

Summarizing the influence that Moynihan’s approach to politics had on him personally, Baker said the senator could “reach across the aisle” to politicians who did not share his views, which were shaped by the lessons of the Cold War that Churchill discussed in his “Sinews of Peace” speech on the Westminster campus.

Baker emphasized a few basic lessons of the Cold War: Never lose sight of the big picture, Churchill’s views on relationships with the Allies during the Cold War were correct, one should pay scrupulous attention to the truth when dealing with enemy propaganda and the law is the bulwark against tyranny.

Baker concluded with an assessment of former C.I.A. operative Judge Jack Downey as someone who exemplifies humility and hard work in the face of adversity. Downey attended law school after more than 20 years of captivity in China.

“Jack Downy reminds all of us — me on a daily basis — that it’s never too late to make a difference.”

Baker later participated in a question-and-answer session on campus. To view the presentation in its entirety, please visit Westminster’s YouTube page here.