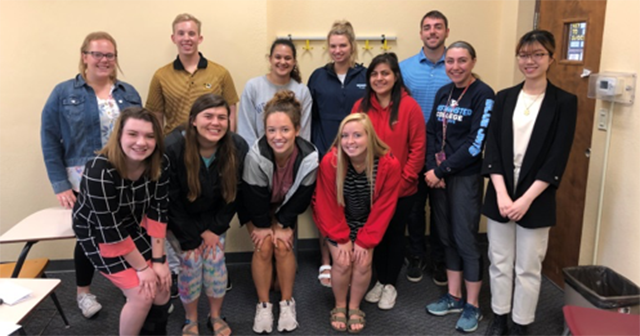 When students first showed up for Professor Keith Hardeman’s SPE 220 class in Public Relations back in January, they had no idea what they were about to do. By May, they walked away with valuable experience within the public relations field, when they wrapped up their PR campaign projects that focused on two departments on campus: the Marketing Department and Security.

With these departments, we applied the public relations techniques taught in the class using John Marston’s Research, Action and Planning, Communication, and Evaluation (R.A.C.E.) technique.

The class was split up into two groups of six. Group 1 met with Lana Poole, Vice President of Development and Strategic Communications, to discuss Westminster’s visibility to prospective students. An outcome of the meeting with Poole was the formation of an internal marketing team. The Student Marketing Team will begin its work this fall.

Group 2 chose Security as its project. Their goal was to make the department more visible. So the students set out to introduce the Security team to the school. By using articles in The Columns and flyers posted around campus, they had the hope that Security would become more visible to the students.

Along with this, this group met with Jack Benke, Director of Campus Safety and Security, to talk about future improvements that could continue the growth of student and Security relationships. Among those improvements were a future social media page maintained by Security, suggestion boxes on campus, and a Security email for students to reach out with.

After presenting their findings to the class, both groups felt good about what they accomplished this semester. When asked whether other students on campus should take the course, Sarah Manley, a junior in the class, stated that she “would definitely suggest the class to future students. Especially if they are pursuing any degree closely related to business.” Another member of the class, Jessica Jia, agreed with Manley’s claim, saying, “it’s a great way to gain useful PR experience before actually entering the professional industry.”