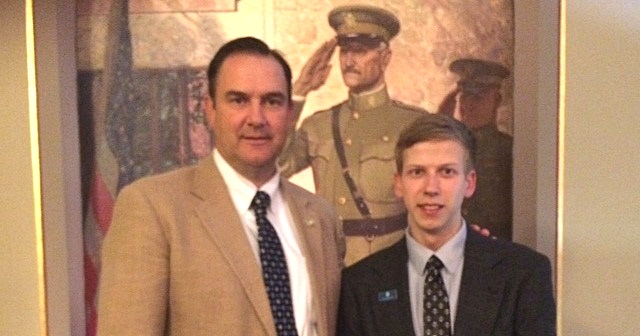 Westminster College senior Will Megl from Troy, MO, President of The Keep Me in College Coalition, is leading the members of this statewide advocacy group in the lobbying effort to ensure Missouri Governor Jay Nixon does not withhold the $15 million increase in Access Missouri student scholarship money which the state legislature approved.

Access Missouri is the one Missouri state sponsored scholarship that is need-based for undergraduate students who are residents of Missouri.

Those who wish to join Megl in supporting the full funding approved by the state legislature for Access Missouri scholarships should contact Governor Nixon at 573-751-3222 or by e-mail here.

The Keep Me in College Coalition is a group of students,  parents, education leaders and concerned citizens 5,000 strong who lobby Missouri government officials to keep a college education affordable at Missouri colleges and universities.

As head of the Coalition, Megl was extremely involved in convincing the state legislature to increase Access Missouri funding.

On the day Megl arrived at the State Capitol Building a conference committee of state representatives and senators were scheduled to meet soon to work out differences in the two chambers budget priorities, which included Access Missouri.  The Missouri House of Representatives voted to increase these scholarship funds by $20 million.  Missouri Governor Jay Nixon and the Missouri Senate did not want more than an $8.6 million in appropriations.

As a result of his and others’ efforts,  Access Missouri funding in the final state budget sent to Governor Nixon included the $15 million increase.

“After telling Senator Kehoe my story and what Access Missouri funds mean not only to me, but thousands of Missouri students, I felt a swing in the momentum,” says Megl.  “To this day I am unsure what happened behind the closed doors of the budget conference and who stood up for our case, but the end result was an extra increase on top of the original $8.6 million to $15 million.  This moment stands out in my mind as a shining example of how state government really works.”

“Serving as the President of The Keep Me In College Coalition this year and continuing on through my senior year, I will continue to fight for Access Missouri,” says Megl.