Specialist on Jewish-Christian Relations to Lecture on Campus 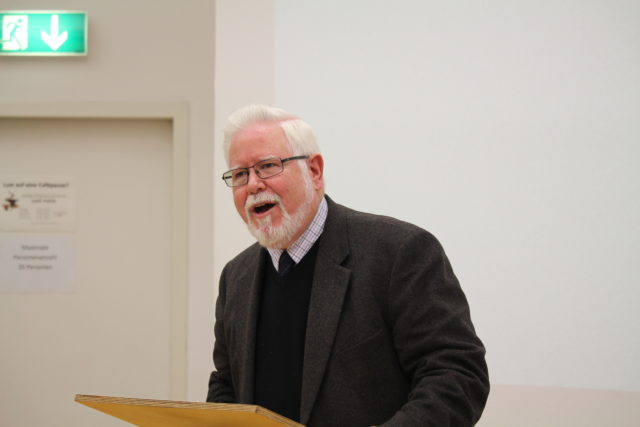 A theology professor who is a respected specialist on Jewish-Christian relations will deliver the seventh annual C.S. Lewis Legacy Lecture at 11 a.m., Thursday, February 7, in the Church of St. Mary the Virgin Aldermanbury on the campus of Westminster College.

Dr. Philip Cunningham, Professor of Theology and Co-Director of the Institute for Jewish-Christian Relations at St. Joseph’s University in Philadelphia, PA, will address this important topic in his lecture, “From Other to Brother: An Unprecedented Rapproachment between Christians and Jews in Our Time,” which is free and open to the public.

“Dr. Cunningham will discuss the history of Christian-Jewish relations and their current condition,” says Dr. Cliff Cain, Harrod-C.S. Lewis Professor of Religious Studies and Chair of Westminster’s Department of Classics, Philosophy and Religious Studies. “He has dedicated his professional and personal life to inter-religious dialogue and to fighting antisemitism.”

Dr. Cain will introduce the lecturer and moderate a question and answer session with Dr. Cunningham following the lecture.

An invocation will be offered by attorney Harvey M. Tettlebaum, a partner with the firm of Husch Blackwell LLP in Jefferson City, MO with a benediction given by College Chaplain Kiva Nice-Webb.

According to Dr. Cain, Professor Cunningham is the “point person” within the Roman Catholic faith to discuss the relationship between the two religions.

The distinguished lecturer has served as President of the International Council of Christians and Jews and on the Advisory Committee on Catholic-Jewish Relations for the United States Conference of Catholic Bishops.  He is also the Secretary-Treasurer of the internet resource Dialogika of the Council of Centers on Jewish-Christian Relations.

Interested in biblical studies, religious education, and theologies of Christian-Jewish relations, he is the author of numerous book and articles on these subjects.  His latest book is Seeking Shalom: The Journey to Right Relationship Between Catholics and Jews.

“We’re living in a world that’s growing smaller and some of the conflicts in our world are religious,” says Dr. Cunningham.  “If Christians and Jews are able to experience rapprochement, that’s a sign of hope for all interreligious encounters.”

Experienced with the media, he has weighed in on controversies such as Mel Gibson’s 2004 movie The Passion of the Christ and the beatification of Pius XII, who was accused of insufficient opposition to the Nazi genocide of Jews.  He has done interviews with NPR, the Associated Press, ABC News and the Newshour with Jim Lehrer.  He also writes opinion pieces for the Huffington Post and Jewish Exponent.

The Lectures are intended to honor the legacy of the late British theologian, C.S. Lewis, by engaging the campus community and the surrounding community in topics and issues that were important to him and that stimulated his writing.

A declared atheist in his youth, C.S. Lewis converted to Christianity at the age of 33 and became one of the most influential Christian thinkers of the 20th century, in addition to being an acclaimed author of over thirty books of theology, children’s stories and fantasy literature.