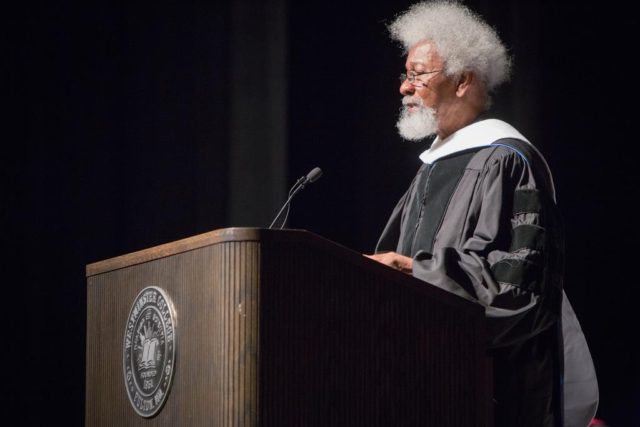 Soyinka, Africa’s first black Nobel Prize winner for Literature, told nearly 200 graduates and a packed auditorium of about 1,200 family and friends, that Obama’s election seven years ago was “a water-shed that many had sworn would never be encountered in their life-time. Yet, it happened.”

He told the graduates they “should learn, and keep as an embedded part of their very existence,” the accomplishments that have been made in their personal lives and their educational journey, but he also warned against political complacency to avoid turning back the hands of time, a veiled reference to GOP Presidential candidate Donald Trump.

“We should never permit what has been gained, the advances that have been made, to be frittered away through complacency,” he said. “The stream that flows from the accumulation of a watershed should not be permitted to dry up, to be polluted, or reversed to dissipate in arid land. It should flow forward, outward, and irrigate the earth that belongs to, and nourishes all humanity, irrespective of gender, race, faith or age.”

Soyinka accepted an invitation to address the graduating class on Saturday, May 7, from Westminster College President Benjamin Ola. Akande, who, like Soyinka, is Nigerian and a long-time friend. Dr. Akande also presented Soyinka with an honorary Doctorate of Humane Letters.

Prior to the commencement address, Molly Dwyer from St.  Louis, MO and John York from Lee’s Summit, MO were honored as Seniors of the Year and Dr. Dawn Holliday received the Patricia Klein Liebling Parents Association Award.  Opening remarks were given by Dr. Carolyn Perry, Senior Vice President and Dean of Faculty; John Elrod, from Fayetteville, AR, Class of 1968,  member of Beta Theta Pi and Vice Chair of the Westminster Board of Trustees; and Kevin Ludwig from Manchester, Mo , President of the Senior Class.

Soyinka’s commencement address was titled “The Versus Syndrome,” and highlighted a “we versus others” concept in which he asked why Obama’s election failed to chip away at racism in America, the dismantling of the Berlin Wall did not end “world tension and class conflict,” or the end of apartheid in South Africa did not end “extreme nationalism?”

“It is difficult to eradicate old habits, especially those that simplify human interactions,” he said, adding that “the answer is embedded in the choice that Americans are presently poised to make,” referring to the November general election.

He saluted the “enthusiasm of youth and the spirit of volunteerism” among America’s young adults who worked tirelessly “to bring pride to a nation that had nearly turned into a world pariah,” he said of young voters who helped sweep Obama into office.

“So, whenever confronted by seemingly insurmountable obstacles in your onward journey, always recall that you already possess that armor of invincibility that reads ‘Yes, we can!’”

In 1986, Soyinka received the Nobel Prize for Literature and delivered an acceptance speech that was devoted to South African freedom-fighter and President Nelson Mandela and the politics of apartheid in South Africa. He has published numerous works in various genres, including drama, novels, essays, and poetry, and continues to write, direct, lecture, and is still politically active.

Westminster College is a selective, co-ed liberal arts college that is ranked among the top five colleges and universities in Missouri, and among the top-ranked colleges in America. It provides a challenging academic environment where students are educated to lead and inspired to achieve. To learn more about Westminster College, visit www.westminster-mo.edu.