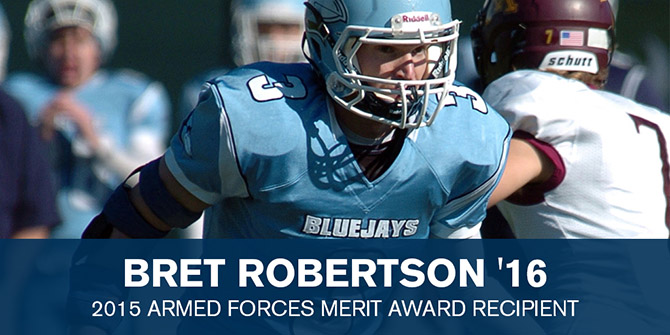 U. S. Army veteran Bret Robertson, a junior strong safety at Westminster College in Fulton, Mo., is the fourth recipient of Armed Forces Merit Award presented by the Football Writers Association of America (FWAA).  Coordinated by the staff at the Lockheed Martin Armed Forces Bowl, the Armed Forces Merit Award presented by the FWAA was created in June 2012 and is presented annually to an individual and/or a group who has created, developed and produced a program within the realm of the sport of football that provides care, concern and support for past or present members of the United States Armed Forces and/or their families.

From California, MO, Robertson joined the Army following high school graduation. He received a Purple Heart for an injury sustained during his military service in Iraq. Using benefits from the Yellow Ribbon program, which supports education for veterans, Robertson chose Westminster College after completing his military duty. He is currently majoring in Organizational Leadership.

In January, Robertson will be flown to Arizona to be announced at the FWAA Breakfast and at halftime of the NCAA Division I National Championship game.

Read more about his award.

Read more about his personal journey.