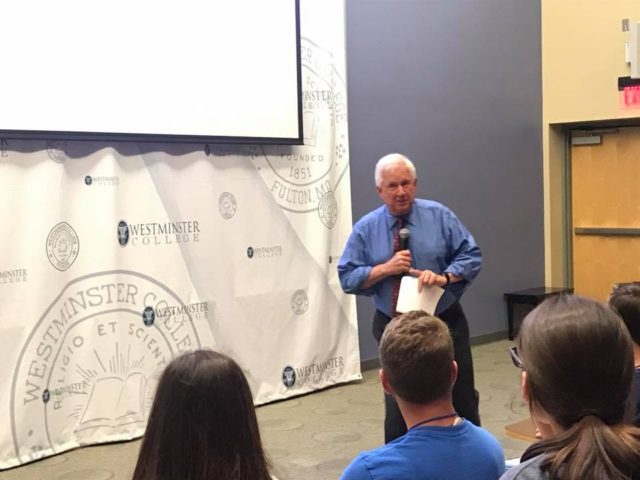 Westminster President Fletch Lamkin spoke on leadership June 24 to some of Missouri’s brightest high school freshman and sophomore student leaders who gathered on the Westminster campus to participate in Leadership in Practice, a four-day program sponsored by the Missouri Chamber of Commerce Foundation.

In his remarks, President Lamkin challenged the class to use all the knowledge they received to be better leaders and better people.

He related to some of his Vietnam experiences, describing through personal examples the importance for leaders to lead with action, set the example, and give hope and confidence.  He asked the class to describe their greatest fears, then following with his own greatest fear, which is the acceptance of mediocrity. He spoke of the values of integrity, fairness, respect, and responsibility, and how they acted as his foundation for decision making. Finally, he described the importance of leading with passion, having no fear of failure, and serving with humility and the spirit of helping others. He described how his daughter modeled that behavior and became inducted in the Naval Aviation Hall of Fame for being the first female Navy pilot to fly a combat mission.

Before coming to Westminster the first time, President Lamkin was Dean of the Academic Board of West Point, where he tripled the number of civilian faculty, quadrupled externally-funded research, and enhanced the Academy’s connection to the academic community while playing a major fundraising role. While at West Point, he served as a department head and as Vice Dean prior to becoming West Point’s 10th Dean. He retired from the Army as a Brigadier General to become President of Westminster in 2000.

Leadership in Practice is a hands-on program that imparts real world knowledge to help Missouri’s youth engage, inspire, and lead.

Students from rural, suburban, and urban schools across Missouri come together to work as a team to solve real-world problems in a fun, engaging environment. The program is set amidst the beautiful backdrop of historic Westminster College, where principles of leadership were formed in 1946 when Sir. Winston Churchill delivered the famous “Iron Curtain” speech.

Leadership in Practice is designed to provide young people with the opportunity to learn the characteristics of leadership and professionalism so they can directly apply those skills in their own lives when they return to their schools and communities.

Celebrating its 22nd year overall and sixth year on the Westminster campus, Leadership in Practice serves up to 150 high school students, helping them develop strong leadership, entrepreneurship, and other critical professional skills. Children of Westminster community members are given application preference.

“It’s a perfect opportunity for young people who want to develop strong leadership skills, and as a bonus to Westminster, it really allows high school students to see what the College is like,” says Brian Crouse, Missouri Chamber Foundation Vice President of Education, who is director of the program.

The Leadership in Practice program is sponsored in part by The Jenny and Warren Erdman Charitable Fund. Warren Erdman ‘81 ΦΔΘ serves on the Executive Board of the program.