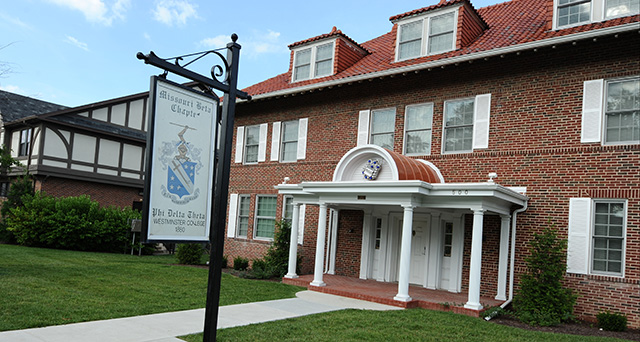 While in attendance, every chapter had the opportunity to receive awards, based on their fraternal work for the entire college year. And many of these awards are exclusive to one chapter in the nation. For Missouri Beta, the Chapter received six awards for the 2014-2015 academic year.

The highest award achieved by the chapter was the prestigious Kansas City Trophy, given to only one chapter of Phi Delta Theta, nationwide. Originally, presented in 1929 by the Cleveland Alumni Club, sponsorship was taken over by the Kansas City Alumni Club in 1958 and still currently sponsors the Kansas City Trophy. The requirements for the award are based on academic achievement, community service, philanthropy, campus involvement, leadership and overall improvement of the chapter, size of institution, and its administration.

The following awards were also received by the Missouri Beta Chapter of Phi Delta Theta during the Kleberg convention:

The Kleberg convention sponsored the Phi Delta Theta fraternity with over 850 members nationwide, including from Canada. The purpose of the convention was to improve leadership and overall preservation of chapters, with respect to the Fraternity as a whole. These members, including those from Missouri Beta, worked in teams to learn how to improve chapters, how to communicate with headquarters, prevent hazing, and how to recruit future members during Greek Rush. When not working, members were able to tour the General Headquarters of Phi Delta Theta and observe the original room where Phi Delta Theta was founded.

“At first, I thought it was going to be awkward and boring, but I met a lot of amazing people and learned so much, even though we were busy for about 12 hours a day. I already miss it,” said Zack Norton ’18.

These skills and experiences were brought back by the six members of Missouri Beta so they could be shared with the rest of the Chapter. By applying what they learned into each member of Missouri Beta, the Chapter will continue to strive for improvement in the coming year and for the years to come. Missouri Beta also hopes to send new members to the Kleberg Emerging Leaders Institute so they may have the same experience in receiving potential future awards for the Chapter and gaining inspiration from the Phi Delta Theta fraternity.

“It was with such a humble honor to be part of an institution that was greater than we could have imagined; how so many Chapters and Colonies were determined to work together in bringing so much more. I cannot wait for future members to attend this conference and take something out of it. They won’t be disappointed,” said Isaac Coronel ’17.