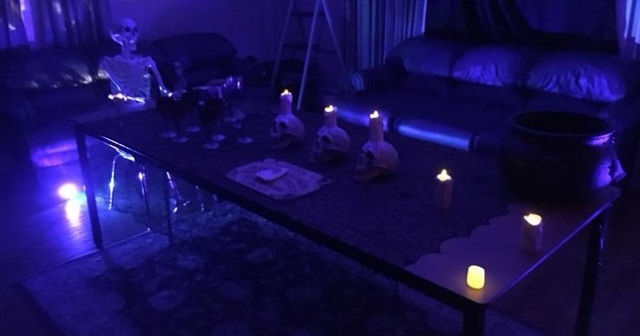 On Saturday, Oct. 21, dark clouds rolled over the Phi Delta Theta chapter house at Westminster College in Fulton, dousing the streets with thunder-and-lightning-laden rain. Braving the storm, over 30 students huddled together in the front yard for the grand opening of Missouri Beta’s haunted house. When the clock tower down the street chimed 11:15, the rain ceased, and the crowd eagerly awaited their turn to journey inside. Behind the unassuming walls of the over 90-year-old fraternity house, a well-coordinated theatrical maze of Halloween tricks awaited.

In all, over 150 guests attended the attraction, despite the storm. To embark on the haunted adventure, each person had to pay $2 to help hurricane victims or donate a canned food item for local soup kitchens. The event ultimately garnered over $250 in monetary donations and more than 50 cans of food.

After donating, the guests were then given a ticket to walk through the house, accompanied by a single Phi Delt tour guide.

Over 15 actives and pledges acted during the event. The actors developed elaborate backstories behind every character in the various rooms and scenes of the haunt. It was integral for them to remain in character as the guests passed through.

Missouri Beta sweetheart Sydney Sexton said she enjoyed trying to figure out who all the actors were. She explained that it was “near impossible” to guess who each creature really was, including her friend, Stefanie Eggleston.

“It was really cool that Stef didn’t smile at me at all, and I stared at her the entire time,” Sexton said.

This was the first haunted house experience for sophomore Emily Nordsieck.

“I was impressed with the story,” Nordsieck said. “Knowing the people who were in it was kind of fun but also seeing this other side of them was pretty cool, too.”

Sophomore Sam Studer was one of the main organizers of the event.

“I personally just thought it was a fun idea,” Studer said. “All of our neighbors have Halloween parties and things but nobody to my knowledge – at least recently – in the Greek community has done a haunted house.”

He stressed the importance for Phi Delt to “think outside of the box” to organize events that would be fun and entertaining for all without controlled substances.

“I thought it could potentially be a big event that would not require us to serve alcohol because that’s obviously not something we can have in our house,” Studer said.

Additionally, Studer said he believes the biggest key to succeeding as a Greek community is welcoming the other fraternities in on the fun. He enjoyed the moments of unity this haunt brought to a generally divided community.

“Some of the best reviews I got were from other fraternities,” Studer said. “I don’t think we should completely separate ourselves from that idea of inviting them as well as the sororities and other people.”

“You guys did an awesome job,” he said. “Everything was like…realistic! It actually scared me a couple times, and I don’t usually get scared at haunted houses. Hopefully, you’ll get more people to go next year.”

Missouri Beta Chapter Home Association President William D. (Bill) Whitlow was astounded. “You all did way more with this event than I ever expected you would,” Whitlow said.

In preparation for the haunt, organizers constructed several spooky Halloween props, some more elaborate than others. Out of toilet paper rolls, some hot glue, and spray paint, they made over 70 creepy dripping candles. Out of recycled plastic bottles, they stuffed realistic, blood-soaked body bags. Perhaps the most eye-catching of all were the homemade glowing toxic waste barrels scattered across the side porch. Still, the brothers did not wish to reveal all their secrets. Each year, haunt organizers plan to add more creativity to their creepy collection of props.

Sexton said that she also loved the hologram used in the upstairs portion of the haunt. Considered the latest in haunt technology, it was a simple illusion created using a projection from AtmosFX® called Ghostly Apparitions. With it, a floating ghost figure appears to materialize out of thin air.

“I’m really bad with jump scares, so that really got me,” she said.

Missouri Beta is proud to have initiated this brand-new tradition. Now that they have their first haunt behind them, the chapter’s goals for next year are to extend a stronger outreach to the local community and to raise at least $1,000 for charity.

View photos from the event below.