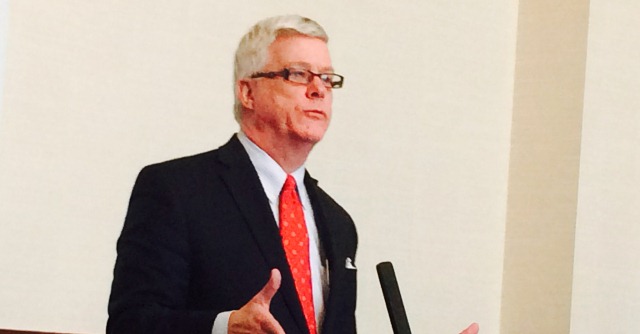 As part of the continuing Westminster program The State Leaders Forum, Missouri Lieutenant Governor Peter Kinder (R-Cape Girardeau) visited Westminster College on April the 4th to discuss Right to Work in the Hermann Lounge. Introduced by Dr. Tobias Gibson as only the second Missouri man to hold this office for currently three terms, Kinder’s previous service of 12 years in the State Senate working on items such as veteran’s rights and military support were also mentioned in the opening.

The Right to Work proposition is arguably the most hotly debated issue circling the Missouri State Capital right now; made all the more evident by the hotly contested advertising on both sides of the issue through media, billboards, internet ads, and radio time as both sides of the topic gear up for a long fight ahead. As Kinder explained to the earnestly listening crowd, Right to Work in its simplest terms means that the state government cannot require individual employees to forcibly join a union if they do not wish to. In other words, these are laws that prohibit employers and unions from excluding non-union members in their workplace or requiring employees to pay fees to unions under a collective agreement negotiated by a union. Currently 24 states located in the southern and western parts of the United States have right to work laws on the books, which corresponds with the fastest growing places in the country economically and politically as Kinder referenced repeatedly in his 45 minute lecture.

Relying on his personal experiences growing up in the southeastern part of the state, Kinder made the case for why should Missouri should finally present Right to Work legislation on the capital floor for the first time in the 193 year history of Missouri statehood. Referencing stories of the hardships faced by St. Louis manufacturing coupled with massive population loss and the loss of related goods in that area, he made clear that Missouri is at transition in its economic policy history. Trying to avoid becoming a “loser” state the likes of Michigan and its bankrupted urban areas like Flint and Detroit, he believes firmly in the power of Right to Work to put in the “winner” category with the likes of Texas and its metropolitan areas like Austin or San Antonio. The future of young people in Missouri depends on good jobs, and he thinks right to work can ensure this for the generation to come.

The State Leaders series will continue on Monday with State Rep. Michael Frame (D-Eureka) visiting to present the negative side of Right to Work.