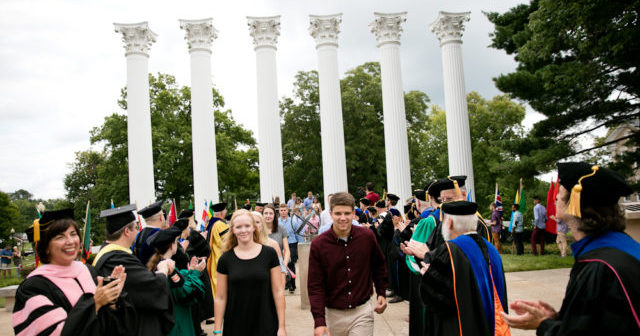 One of the most beloved traditions at Westminster College is when new students are officially welcomed into the Westminster community by walking onto the campus through the sacred Columns, which are all that remain of the original administration building which was destroyed by fire in the fall of 1909.

Called The Columns Ceremony, this Westminster rite of passage will be held at 3 p.m. on Saturday, August 18.

The new students will process to the Columns, led by the Skulls of Seven, an honor society comprised of seven students who epitomize the virtues of tradition, history, scholarship, loyalty and friendship, citizenship, service, and honor.

Recited by the citizens of Athens, Greece, more than 2,000 years ago, the Athenian Oath is frequently referenced by civic leaders in modern times as a timeless code of civic responsibility.

Following the Oath, a response will be given by two members of the new class of 2022.  This year’s respondents are DeAndre White, a first-generation college student from Salisbury, MO and Katherine Bloom, from Pullman, WA, who comes from a long legacy of Westminster graduates.  Other members of the Bloom family to graduate from Westminster include her father Greg Bloom ‘91, her uncle Bret Bloom ‘87, her grandfather Robert Bloom ‘62, and her great-grandfather F. Maurice Bloom ‘32.

At the conclusion of The Columns Ceremony, the new students, led by a bagpiper and the Skulls of Seven, will process to Champ Auditorium for the New Student Convocation ceremony.