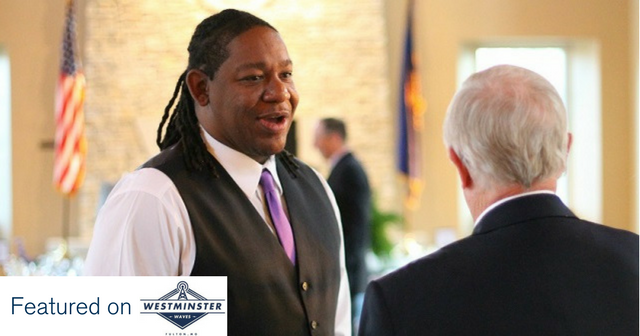 In a recent Westminster Waves interview, Westminster Vice President and Dean of Student Life Bomani Spell discusses the addition of two new Greek organizations planned for the fall of 2018: Zeta Phi Beta Sorority and Omega Psi Phi Fraternity. The groups were founded roughly 100 years ago on the campus of Howard University: Omega Psi Phi in 1911 and Zeta Phi Beta in 1920. Open to any student who wishes to be involved, both organizations are predominately African-American.

Listen to the Westminster Waves interview for the complete story.

“We had 12 students who signed a petition who wanted to bring this organization [Omega Psi Phi] to campus,” says Bomani Spell, Vice President and Dean of Student Life at Westminster. “This was student-led — they wanted it here — and they just received word that it was approved and will be here in the fall.”

In addition to the 12 male students who petitioned on behalf of Omega Psi Phi, 16 female students signed the petition to bring Zeta Phi Beta to campus. Alumni and faculty reached out as well. Joe Collier ’01, a member of the Jefferson City graduate chapter who tried to bring Omega Psi Phi to Westminster when he was a student, was excited to help future students get the opportunity. Nicole Elliott, former Director of Campus Life at Westminster, helped guide the students through the petition process. Maj. Gen. (Ret.) Byron Bagby ’78 was also instrumental in bringing the organizations to Westminster.

“It’s going to be not only great for diversity, but it’s going to be a great recruitment and retention tool,” Spell says. “Dr. Lamkin, in his foresight, when I brought this to him, realized that this would be great for students, so he OK’d it and that was paramount as well.”

Westminster’s campus is currently 51 percent non-Greek. Although existing sororities and fraternities have done a good job of operating inclusively, Spell says, bringing in Pan-Hellenic (rather than exclusively Panhellenic) organizations such as Omega Psi Phi and Zeta Phi Beta opens the door for legacy students.

“Historically, family members are part of these organizations,” Spell says, “so you have a mother, brother, father, sister who’s a member, and they want to keep that lineage going.”

“These organizations historically have an enclave of a high graduation rate and a high retention rate,” he adds.

Another notable aspect of the new Greek groups is that they are citywide organizations rather than campus-wide, which means the fraternity and sorority will also be open to members from William Woods University, as well as graduate members of the community. Community service and mentorship, viewed as central to Pan-Hellenic organizations, will be main areas of focus for both groups at Westminster. Zeta Phi Beta’s graduate chapter in Columbia will actively monitor the younger members at Westminster to ensure that community service hours are met and that the mentorship aspect is achieved.

“This is going to be a great opportunity,” Spell says. “We pride ourselves on having a global network, on being a diverse community, and this is one way we can show that. This is an outward show of our inward grace.”