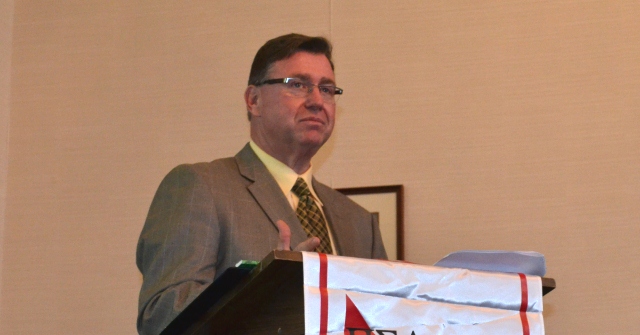 On Tuesday, April 8, Justice Zel Fischer of the Missouri State Supreme Court traveled to Westminster College and gave an informative lecture, sponsored by Pi Sigma Alpha and Dr. Tobias Gibson’s Constitutional Law class. Justice Fischer discussed the historical perspectives and contemporary issues surrounding the Second Amendment’s right to keep and bear arms. With two opposing points of view offering drastically different interpretations of it, the Second Amendment is a polarizing issue in American politics. The debate between these two interpretations has persisted since the founding of this nation, in large part because of the ambiguity of the text. By exploring the evolution of Second Amendment jurisprudence and analyzing the interpretation of the Framer’s original intent, Justice Fischer offered his opinion of how the amendment ought to be understood.

The debate over the meaning of the Second Amendment can be divided into two competing views. One reading of the amendment, often associated with those who favor government restrictions on private gun ownership, interprets the right to keep and bear arms as a collective right. This inference implies that the amendment guarantees only the collective right of states to arm their own militias. The competing viewpoint, promoted by pro-gun groups, stresses that the amendment guarantees an individual right to keep and bear arms. This understanding implies that individuals possess the right to engage in self-defensive behavior when necessary. Although the two sides disagree on the extent of the amendment’s protections, both agree that it, like any right, is not without limitations.

Historical analysis of the amendment provides evidence of an individual right. At the time of the amendment’s enactment in 1789, most states already had the right to keep and bear arms enshrined in their state constitutions. At the time, the right of individuals to arm themselves was regarded as a necessary protection against the fear of government tyranny. Today, almost every state has adopted in its constitution similar protections as afforded in the Second Amendment. Since most of the states offer their own gun protections, Justice Fischer estimates that state courts decide nearly 95% of cases involving such rights.

Justice Fischer opined that everything one needs to know about the 2nd Amendment protections can be found in five cases, four U.S. Supreme Court cases, and one Missouri State Supreme Court case.  In 1875, the United States Supreme Court held in United States v. Cruikshank that the right to keep and bear arms was a fundamental, individual right under the Constitution’s Privileges and Immunities Clause. More recently, the U.S. Supreme Court decided in District of Columbia v. Heller (2008) that the Second Amendment supported an argument advocating for the individual right interpretation. However, this case ought not to be interpreted too broadly since it applied only to instances of self-defense in one’s own home. Additionally, it applied only to the District of Columbia and had no effect on any state laws. It was not until McDonald v. City of Chicago (2010) that the Supreme Court used the Incorporation Doctrine of the Fourteenth Amendment to apply the Second Amendment to the states. Here, the Supreme Court established the amendment’s current test for constitutionality: Does the restriction in question prohibit conduct that has traditionally been considered lawful behavior? In this case, the Court held that Chicago’s ban did so violate traditionally lawful behavior and thus the city’s statute was overturned.

Fischer also pointed to his prescient concurring opinion in Missouri v. Richard (2009), a case involving a Missouri man who brandished a firearm while intoxicated. In his concurrence, Fischer wrote that the Second Amendment “applies to the states and confers an individual right to keep and bear arms, even though the United States Supreme Court has yet to make that declaration,” based on his view that “preferred freedoms” found in the Bill of Rights have been incorporated to the states—and that the right to self-defense is a preferred freedom. Fischer did note, however, that like other civil liberties, the right to bear arms was not limitless. Hence, he agreed with the majority in Richard that a law prohibiting the use of a firearm while intoxicated was not unconstitutional.

Justice Fischer regards the Second Amendment as the nation’s “original homeland security.”  He grew up around guns and currently has a concealed carry permit. His staunch support of the individual right interpretation is grounded in his understanding of the nation’s history and his method of constitutional interpretation – the same interpretation as reflected in Supreme Court jurisprudence.