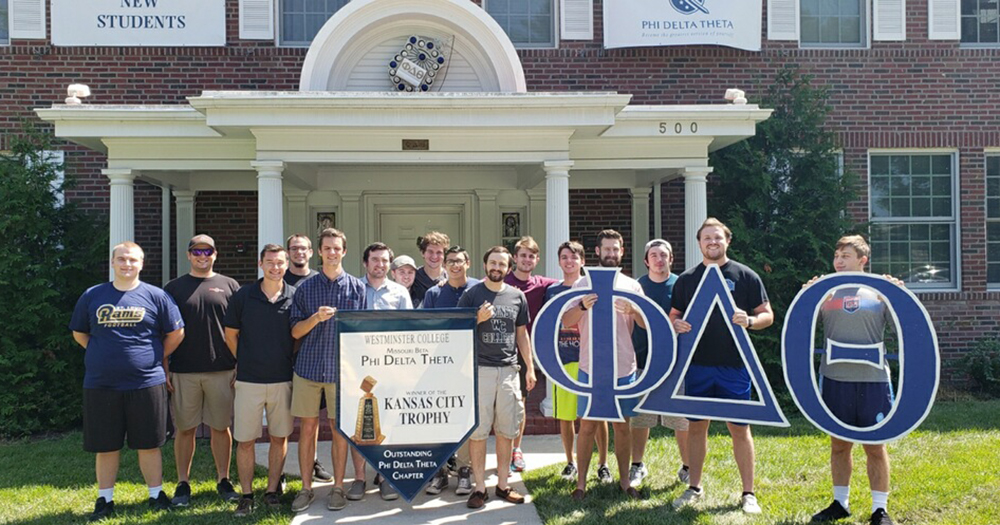 Missouri Beta Chapter of Phi Delta Theta at Westminster College earned the highest award a chapter of its size could receive at the fraternity’s recent Kleberg Emerging Leaders Institute from July 27 to July 30 in Oxford, OH.

The coveted Kansas City Trophy is among a number of top awards the chapter took home. The accolade, given to small Phi Delt chapters at colleges with fewer than 7,000 students, was the result of a six-page essay and three letters of recommendation submitted to Phi Delt national headquarters on behalf of the chapter.

President Ben Morrow ‘21 of Sullivan, MO, says Missouri Beta Chapter was delighted with the award. “We were a top contender because of our scholarship, excellent community service, philanthropic efforts and extensive alumni involvement,” he explains.

Missouri Beta Chapter has received the Kansas City Trophy seven times since the establishment of the award in 1929.

In addition to the Kansas City Trophy, the chapter was awarded a number of other accolades.

Locally, the chapter received a total of 11 awards. “Phi Delta Theta earned Greek Excellence this year and remains the only fraternity on campus ever to do so,” Morrow says.

He adds that all members of Missouri Beta Chapter are particularly proud of the recognition they received for their devotion to community and philanthropic service. “Phi Delta Theta is proud to have received all of the recognitions this year,” Morrow reflects. “We dare to defy negative fraternity stereotypes.”

If your Westminster fraternity or sorority attended a conference over the summer, send the information to westminstertoday@westminster-mo.edu. We’d love to hear from you!