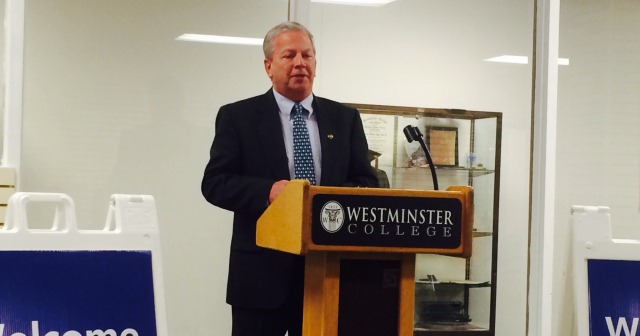 A union member for more than 30 years, Representative Michael Frame, a Democrat from Eureka, Missouri, is one of the strongest opponents to the Right to Work legislation that is currently being debated in the State Capitol.

Rep. Frame came to Westminster College on Monday, April 7, to discuss the legislation as part of the campus’s State Leader Forum. He also spoke in response to the recent visit from Missouri’s Lieutenant Governor Peter Kinder, who discussed the legislation as a proponent.

The key bill being debated for the issue is House Bill 1099, the “Freedom to Work Act.” Sponsored by Representative Eric Burlison, a Republican from Springfield, the bill states that a person’s employment shall not be tied to union membership, paying dues or donating to a charity without consent.

Proponents of the bill argue that, without this legislation, the state of Missouri will continue to suffer job and industry losses. During his talk on Friday, Lt. Gov. Kinder argued that the nearly non-existent auto industry that Missouri once had would be no longer if the trend continued. Kinder and other proponents say that without Right to Work legislation, the auto industry would go extinct within the state.

Rep. Frame took a different approach to how Right to Work legislation would impact the state’s economy and workers. When pressed about the issue, Rep. Frame said House Speaker Tim Jones, Rep. Burlinson, Lt. Gov. Kinder, and other proponents admit that “Right to Work would drive down [workers’] wages.”

The reason there are proponents for the “cleverly worded legislation” is due to an “exchange for campaign contributions,” as Rep. Frame stated. The campaign contributions come from “secret groups like ALEC [the American Legislative Exchange Council] who say American labor is too expensive.” However, Rep. Frame, among others, believe that the “Americans workers are most effective.” It appalls the representative when considering that despite the American worker’s effectiveness, “wages have been stagnating.”

Going along with his argument that Right to Work laws would drive down workers’ wages, Rep. Frame cited collective bargaining being more effective than individual bargaining. Union members are able to “walk into [a boss’s office] as an entire workforce.” The representative argued because an entire workforce of union members can walk into an office asking for demands to be met, the wishes will most likely be fulfilled.

Rep. Frame’s primary argument was that the American manufacturing industry has been ignored and exported. He stated, “We have turned this economy inside-out with imports … the origin of the product seems to have no worth … we care about the price.”

In closing, Rep. Frame demanded “this fraud to stop. Our weapon is our vote and we intend to use it.”

A strong debate occurred among the students, staff, faculty, and community members that attended the lecture. Rep. Michael Frame was in direct opposition to the argument Lt. Gov. Peter Kinder made last Friday. As part of the State Leader Forum, those connected with Westminster were given the opportunity to listen to both sides of the argument in order to be more informed of the issues facing the state of Missouri.