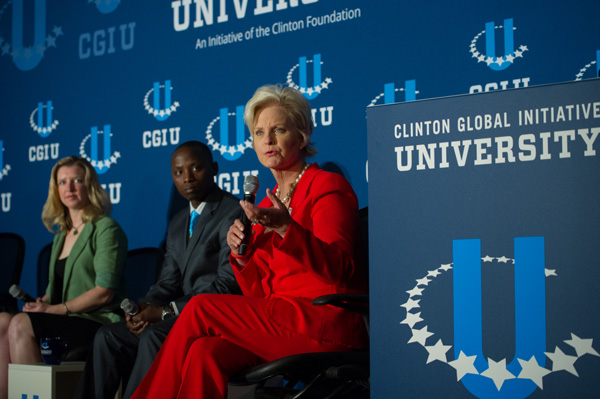 At the invitation of President Bill Clinton, Joseph Munyambanza, Class of 2015, took part in the Clinton Global Initiative University in Phoenix on Saturday, March 22. Joseph spoke on transitional justice, how to rebuild affected communities after wars. Above, Joseph is seated next to Cindy McCain, wife of the former USA presidential candidate John McCain, at the event.

Thanks to his drive, vision and dedication, Joseph’s focus on education is transforming the lives of youth in Africa, while he continues his own studies a world away in the United States, at Westminster College.

Joseph’s rise to leadership started at a young age when he faced oppression and triumph though overcoming obstacles from life in a refugee camp.  When Joseph was six years old, his family was living in the Democratic Republic of Congo (DRC) when war broke out.  Joseph and his family fled to Uganda to live in a refugee camp with 23,000 others.

Faced with the difficulties from life in the camp, Joseph felt the only good way to avert his frustration was by focusing on his education.  He would walk for an hour and half to get to school everyday, while his parents worked in gardens in order to earn money for books and pencils.  He excelled in school, receiving several scholarships; however, he noticed that many students from the refugee camp were performing poorly in their school work.

In 2005 this observation inspired Joseph, along with five fellow students, to form Congo, Burundi, Uganda, Rwanda and Sudan (COBURWAS) International Youth Organization with the goal of improving access to education and the quality of education available.  Between 2005 and 2007, Joseph piloted tutoring programs that helped more than 60 students successfully complete primary school. At the 2014 Clinton Global Initiative University, Joseph discussed how the COBURWAS model can be used in other parts of the world affected by conflicts.

As a result of his COBURWAS work, Joseph is one of 18 young people chosen to serve as advisors on international education to the UN Secretary General and Gordon Brown, the UN Special Envoy on Global Education.

“We work across the globe and today we are counting down. We still have 57 million children across the globe who are out of school,” says Joseph about the UN Youth Advocacy Group that holds three priorities: to put every child in school, improve the quality of learning, and foster global citizenship. 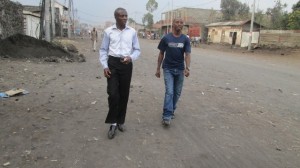 For their fight against extreme poverty, Joseph was recognized along with President Ellen Johnson Sirleaf of Liberia as one of four 2013 Global Citizen Award winners by the Global Poverty Project, in partnership with the UN. He was also named to the 2013 “Top 99 Under 33” list by the Diplomatic Courier for his foreign policy leadership.

At Westminster, Joseph balances his coursework with fulfilling his service mission. Weekly conference calls keep him connected with young leaders at the  COBURWAS head office in Kampala, in the Congo and in different locations where they have students. He travels as much as he can to connect with partners and to learn additional skills and knowledge from other, related programs, and he has found valuable mentors, experts in organizational building, to help him.

“With the team in Africa, fellow founders, I am able to continue the work, because for the last 8 years (since 2005), we have learnt how to work as a team under all conditions anywhere in the world,” says Joseph. “Everyday, I feel like I am in Africa. And the minimum number of emails related to the work of COBURWAS per days is not less than 30. Whenever the semester begins, I write down my school schedule and most of the gaps in times I am not in class, are filled with COBURWAS responsibilities. It is interesting, not easy but I am used to it.”

Joseph says he is working to develop COBURWAS internships for Westminster students. After graduation, he plans to continue his work with COBURWAS and attend graduate school before ultimately planning to return to Africa to serve his people full time.

Watch Joseph’s video from the 2013 Global Citizen Festival below.