Folk-Rock Duo to Give Coffeehouse Concert Performance on Campus 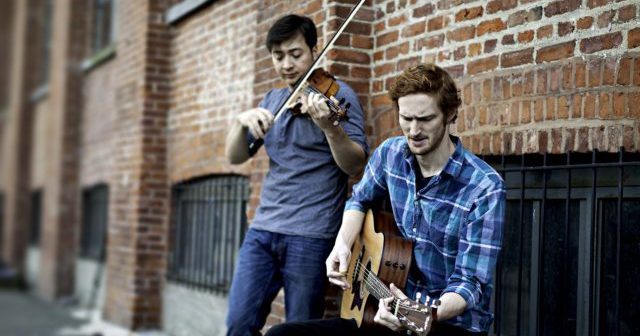 Now that students are getting settled in for the fall semester, the Campus Activities Board is offering a chance to sit back and relax with some good music from the folk-rock duo Hunt for Hunter at a Coffeehouse Concert at 8 p.m., Wednesday, August 30, in JCI.

Based out of Brooklyn, New York, Hunt for Hunter is comprised of Michael Hunter on violin, guitar, and vocals and Ian Hunt on cajón, guitar, and vocals. Their performance will be a blend of their diverse musical backgrounds, which include bluegrass, classical, rock, and folk.

A typical performance by the group showcases Michael singing and playing the violin while Ian plays guitar and cajón with his feet simultaneously.

After years of playing a weekly performance at a local bar in the East Village, the two have developed an easygoing, intimate stage presence which offers honest songwriting and musical virtuosity.

The duo occasionally expands to a full rock and roll band with Ian moving to the drum set and Diwas Garung and Drew Jones joining them on electric guitar and bass guitar, respectively.

Michael also has a solo album entitled “A Chance to Shine.”

Hunt for Hunter is devoted to presenting a thrilling live show, writing great songs, and forming a connection with their audiences.

Listen to their most recent album, No Locks & No Bars, below.