To Go Greek or Not to Go Greek: Maddy Gipe Shares Her Story 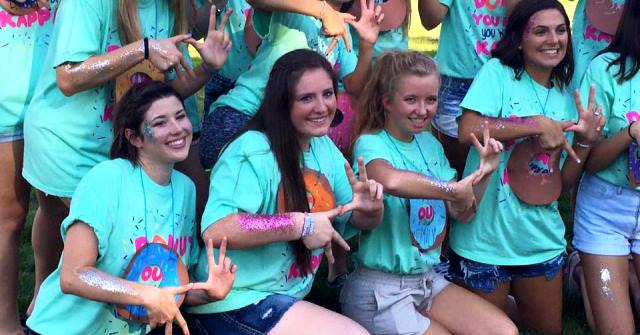 Deciding whether to go through Women’s Greek Recruitment can be hard for a freshman, especially if she isn’t attracted to the sorority stereotypes depicted on TV and in movies. Maddy Gipe ’20 of Chillicothe, Missouri, struggled with this decision herself. Although she began going through recruitment skeptical of sorority life, she later realized she actually enjoyed the experience and decided to go Greek herself. 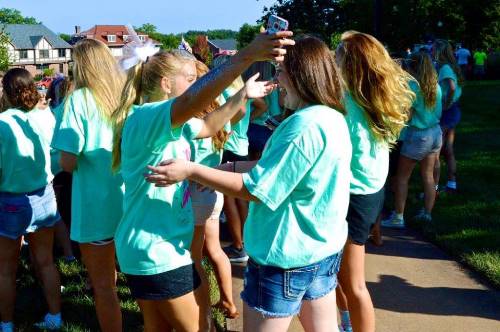 Gipe (right) meets her new sisters after running down the hill on Bid Day.

I didn’t know very much about Greek life and wasn’t sure if it was for me. The sorority stereotype didn’t seem like it fit my personality, and I was also worried about money and the time commitment.

The only thing I had seen about Greek life from TV and movies was girly, glittery stuff and lots of partying, which doesn’t really fit my personality.

What made you decide to go through recruitment in the end?

My cousin was Greek here at Westminster, so she highly encouraged me to at least give it a try. In the end, I decided to go through recruitment to meet new people and see what the experience was like. 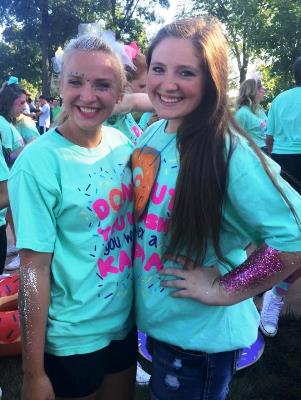 Recruitment was a busy time and very stressful because I felt the need to look my best every day and prepare myself mentally to meet so many new people, but it was also a really fun time once I was in the middle of it.

Can you walk me through recruitment?

The first day, all the girls going through recruitment got to visit each sorority and talk to a few of the active sorority members to get to know them and learn about their sisterhood. This was a cool experience because I got to see the cultural similarities and differences between the three sororities.

On the second day, we went back to the sororities and got to learn about each of their philanthropy projects and how they help the local community throughout the year. Each sorority seemed to have a strong commitment to service but showed they like to make the world better in different ways.

The last day was Preference Day/Bid Day. In the morning we had the chance to talk with some of the active girls again at sororities we were invited back to so we could ask any last-minute questions about what being a Greek is like and what it is like in that particular sorority. We then ranked our top two sorority choices and took a break. Later that day, we met and found out which sorority we received a bid (invitation to join) from, made the decision to accept or decline it and then got to run down the hill to meet our new sisters. 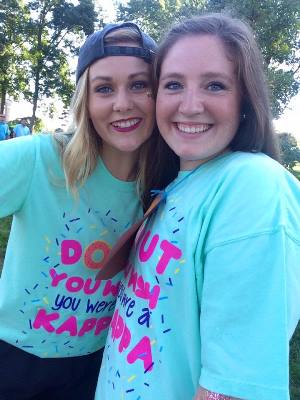 I liked being able to get to know different girls from each sorority, learning about their philanthropy projects and making new friends with the other freshmen in my group.

After going through recruitment, I felt like I had more in common with the girls than I expected. The stereotypical view of Greek life shown on TV and in the movies isn’t completely accurate. The actives were all very welcoming and sweet.

Do you like being in a sorority now? Why?

I definitely do. Although I had already made some friends on campus, now I always have someone to hang out with, borrow clothes from or anything else I could possibly need. There is much more to being in a sorority than I thought; there are multiple fun activities as well as serious tasks we complete that make us feel accomplished.

What do you look forward to as a sorority member now?

I am excited to see what is to come as we move forward into the year. I am especially looking forward to formals, philanthropy projects, fundraisers and hanging out with my sisters.